David Elliott - What are these charts about? 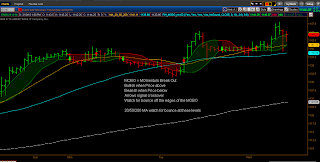 I'm impressed by the MOBO indicator, and the others are good too, but while David Elliott, AKA FW has manipulated them to get different results, it seems that he has based everything on just a few methods.
Generally I would not want to rely on a package of similar indicators, but his results are impressive, and I'm still making my mind up about the system.

It's a subjective method even though at first glance it might appear to be objective where trades are place strictly by the indicators. His show helps to understand his method. FW tells people they must trade for themselves, and suggests incorporating what works for you.

The whole method is confused by terms, and acronyms that he has created. An example, rather than MACD he says FuelCell, and many acronyms such as
SBU = Snap Back Up
SBD = Snap Back Down
IHF = Ice Hole Failure, price testing and failing at the 50 period moving average from below.

Just like Elliotticians use terms like P2, and ED it helps to speak a common language , but it's been a struggle to get to the level of understanding where I feel comfortable because of the a fore mentioned renaming of common terms and the abundant use of proprietary acronyms.
His club is like a cult, but that's OK with me; some would say Elliott Wave or Gann Theory is a cult.

The David Elliot Club has been available for years, but just recently opened to the public. In an effort to keep newbie questions out of the conversation he posts the rules numerous times throughout the day. Hopfully there will be a time when it's understood that newbies will understand that there are requirements before posting, and these reminders will be posted less often.

He provides a lot of material to get started, and requires newbies to read it before posting, but that's half the problem. It's too much material, therefore I've condensed a lot of what I've learned during the past few days of intense study

I appreciate that David Elliott's show, and studies are free, and I highly recommend looking into the FW studies.

Posted by Robert Campbell at 11:23