Only 6 points between a Bear and a Bull

Please bear with me I got carried away tonight but this is exciting!

Major Wave A ended on March 6th at 666.79 SPX
I'm going to present two counts which differ widely. The count I've been holding to (I'll refer to it as the current count) condones the idea that we have nearly competed the correction off that March low, and are close to a top of Major Wave B. The Alt count sides with the theory that we still have a Wave B downward correction to complete before turning back up for the final peak of the correction with Wave C of Major Wave B taking us to the 1015 target..

Here are two charts of the current count. The first is recent activity, and is a close detail of the second chart which shows us in Wave C which began on March 31st.

This would finish Major wave B with a target of 1003 to 1011. We are just 3 points from invaliding this count.

I'm not completely ready to give up on this as count. Previously I said 903.02 was the peak if (wave i). That was violated today but this chart below shows how I reevaluated the count, and moved it down hill to 899.99. On a one minute chart it looks like the right thing to do. It's a small change but it keeps the current count valid.

Tomorrow will make all of this quibbling over 3 points a moot point. If we overlap then I'll go back to the idea that we are in Minor Wave C with the following targets

Below is the Alt count that used to be the preferred count before it was the alt count. I know I've waffled, but the Elliott Wave is good because it allows for changes, and visualizing possibilities. It's when every thing confirms the count that you want trade. Right now the stops are close so the risk is small compared to the returns. With the current count we have a stop only 3 points below. With the Alt count the stop can be placed just 3 points above. Tomorrow should clear a lot of this up.

In the close up chart below, you can see a wave forming. If this is the beginning of a decent to 800 there should be no reason to violate the bottom of this last wave only 3 points above.

In the case of the current count - if 899.99 is violated the count is invalid. So there are only 6 points between supper bullish and supper bearish counts
.

iv,
Thanks for for the question about the count. I needed to present this, and may not have if you had not said the count was confusing. I hope this clears it up. I know I'm inconsistent with my nomenclature but my software does not allow a lot of variations, and it always seems I need to go one level lower than there are label variations. Mostly I get caught up in the immediate wave forms, and while it all makes sense for that chart when you look back, and find that I'm using different colors, caps or iv instead of 4 it can get confusing.

Looking at the Ichimoku Kinko Hyo I get that we are slightly over sold in the short term charts, but overall there is a Bearish appearance to the charts. Here is the M30 chart. 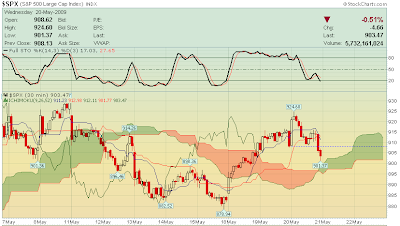 So if I had to choose right now... I'm a Bear and like the Alternate count. I think we are going down. The EUR/USD looks like it may trade in a narrow range so I'm getting no clues from the Dollar after it's recent devaluation.

Posted by Robert Campbell at 18:58