This fist chart is probably bettered by the following charts But it's what I saw. 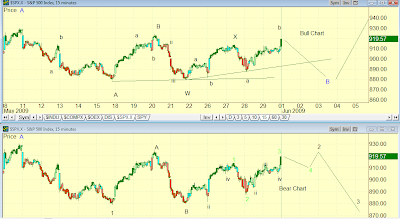 Staying with the scenarios I've been using recently I have made both Bear and Bull charts as seen above.
I'm starting to become confused by all the possible ways to count the various scenarios.
So for my own clarification I'm going to show the counts I think have merit,
beginning with a count posted on Daneric's blog.

It's also a very bullish count with the expectation that the market
will begin Wave e to complete Wave X on Monday.
This will be a 5-3-5-3-5 triangle.
So Wave e will have to finish with five waves.
Daneric researched and documented an interesting rule from
Elliott Wave Principals about X Wave Triangles.

I must have a different version of the EWP but I'll try to find it too.

This next chart is the recent bearish scenario I have been using.

Another Bearish scenario assumes the fifth wave of Wave C failed to make a new high.
This places the Peak of Wave A at 924.60 as can be seen in the chart below.

The chart below is the bullish scenario I've been charting recently.
It assumes Wave A finished at 930

This next scenario assumes Wave C has extended. This was looking very good until Tuesday the 26th, when the market lost vitality. By late Thursday the 28th this scenario suffered a crushing blow. Wave 4 over lapped Wave 1 and thus W X waves have been inserted to keep this chart alive.

I just visited Rich's blog and see what I missed.
He saw the triangle

In the past the Elliott Wave has served me well, but after putting this together I can see how some think it's more about making the count fit the wave than about making accurate predictions. Elliotticians have certainly been getting their butts kicked. That may be a good thing because it will tend to make all of us think harder, and look further for variations we may have over looked. Kudos to Tony Caldaro who was one of the few who caught the bottom in March. I still kick myself for being so close minded.

One thing I've noticed is that, come Monday the market had better go down. I have no labels for an upward move. Even the Bull charts require a reversal!

Let me leave you with an M60 Ichimoku chart. All the time periods are Bullish although somewhat over bought as they flying high above the clouds. 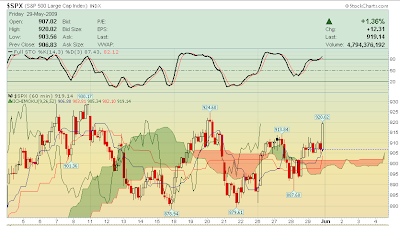 Posted by Robert Campbell at 09:34