Finding the correct count has not been easy, but it's clear I previously misinterpreted the wave . I believe Wave A finished at 930.17, and we began the long awaited Wave B three days ago.

It appears that the rally from 912.62 to 930 on May 8th was in fact the five waves up I was looking for. I missed this because I expected a more than simply creeping over the peak of wave 3 and 943 appeared to be the likely target for several reasons. It's actually a strong sign that this market has become tired and might have been anticipated except for the fact that it has pushed relentlessly upward for so long.

Anything could happen, but I'm no longer targeting 943 even though there is still a possibility of that. If the market continues up significantly past 911 I will post that alternate count, but I firmly believe the Bears are in control now.

The Ichimoku charts all gave strong sell signals with the price dipping below the Kumo on the M60 chart.

I find it interesting that 765 used to be our target when looking for a 38% retrace. Now it's a 68% retrace. The waves have stayed true to Fibonacci.

Short term I'm expecting a small rally to 911 which is near the top of the M60 Kumo as well as a 61.8% retrace. The market should begin to fall soon after that, and accererate after breaking back through the bottom of the M60 Kumo. 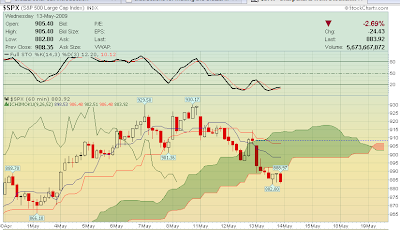 Posted by Robert Campbell at 13:40