I’m finding it hard to break years of sloppy notation. I've always known what I mean, but showing it in a respectable Blog demands much more diligence. Two days ago I decided to set up an Elliott Wave Notation System I could use with my software. I think I have the hierarchy correctly labeled now, but if you see mistakes please point it out.

One thing I've noticed is that there are a lot of triangles going on. There are several ways to count the wave since March 2009, but most end up with a required rally to finish Primary B.

I'd like to recommend Daneric's Elliott Waves . He has really put a lot of thought into what is going on and has some interesting variations in his June 5 Update too. I especially appreciate his study of other indicators such as the the Daily Sentiment Indicator and PE Ratios.

Monday will be telling. If we break the bottom of the triangle developing in Minuette ii, I would move the target to 924 and label it Minute Wave iv. That would be a flat 3-3-5 beginning on June 3d. Other than that I don't have a bearish chart for Monday.

The Ichimoku Kinko Hyo M30 Chart below is looking weak, but not without hope of one final push to higher ground. 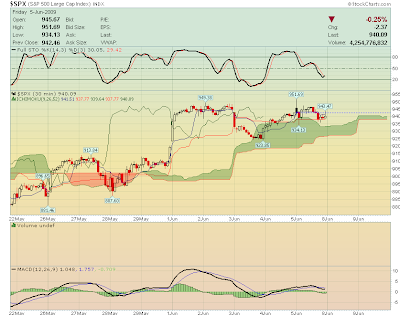 Posted by Robert Campbell at 09:29