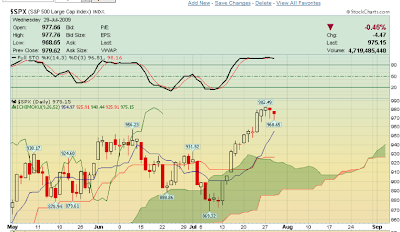 An impulse wave may have begun, but this choppy/indecisive market gives little to base an opinion on. $BPSPX is at 71.20 and we have made 2 lower highs, and two lower lows in a row so while it's not anything to trade on; it's a sparkle of bearish bling.

The body of the candles are near the top so it shows the Bulls still are willing to buy the market up, but the long tails with lower lows indicate that the Bears are beginning to show some force for the first time since July 13. That's eleven days in a row for the Bulls! The Tenkan-sen will offer support at 956. The Kijun-sen and the Daily Kumo will offer support at 925 when we fall.

If I understand the charts at Price Time Volume Investing, there is some indication that tomorrow may be a significant day. I have not followed that theory long enough to completely understand the charts, but it does seem that we are over due for a break out from the doldrums. To be fare a day or two from tomorrow would still be a good prediction over such a long term.

I will be glad to finish this up wave. I'm ready to dance like a bear, and still looking for a reversal at 990.


Analysis presented on this blog has only informational and educational purpose and does not represent a proposal for buying or selling currency contracts.

Posted by Robert Campbell at 18:04