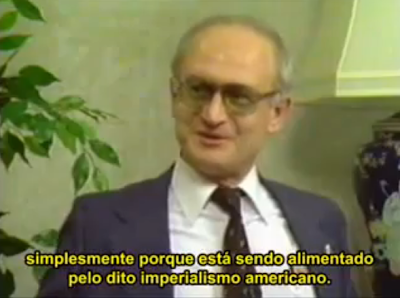 Elliotticians have privileged insight to human nature. As investors we apply that knowledge to the value of currency, stocks and commodities. But the Elliott Wave can be applied to so many other areas of nature, including political beliefs. Below is a video interview with Yuri Bezmenov, a former KGB agent.
The Fall Of America Part III

This is the last part of the interview. It got to the heart of what I wanted to address. The first two parts of the interview may also be of as much interest to you as they were to me.
Part I (Speaks about his youth and work as a KGB agent)
Part II (Speaks briefly about the Capitalistic Imperialists support of the Soviet Fascists which in the end will be their own demise)

In the third part he talks about the four stages of a master plan to brain wash generations of Americans though demoralization, and how this first stage has been more successful than anyone could have imagined. What I find interesting is the way this plan fits in with the impending P3 wave, and the larger Grand Super Cycle downtrend. A world wide depression may be all it takes to push the world into a revolution.

I'm not bringing this up as a political statement, or to be a fear monger, but simply as a view of a larger picture of the state of the world, and how I see many rhythms of nature converging.

Certainly we have always had ongoing disasters in the world throughout all of history, but it seems we are at the breaking point of many global problems. Global warming, political unrest, looming depression, and extreme wealth and power distribution are all issues that in one way or another have become critical to all of mankind.

I no longer subscribe to the EWI letters, but wonder if there has been some recognition of this topic by Robert Prechter and his team of experts.

Anyhow if you watch the film keep in mind the extreme bullish percent figures we have recently seen, and think about the possibilities of sentiment control that may have been used to bring us to such an extremely over valued state.

Sometimes I wonder if the mortgage crisis was planned from the beginning. If you also wonder about conspiracy another interesting video to watch is Zeitgeist, but I ask that you either skip or simply endure the first 9 minutes of this video. It does improve, and I found the last two hours to be very interesting.

I feel that there are still many missing pieces of this puzzle, and it appears there may be quite a bit of deception involved. But the bottom line is that we Elliottians have had the insight to see where this is going.

Posted by Robert Campbell at 08:35