Higher Prices in the Morning? 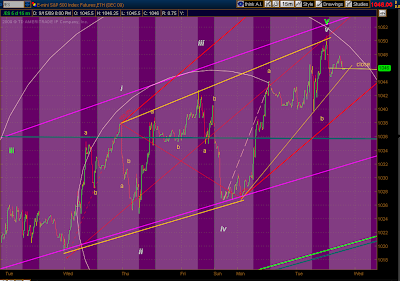 This may be the peak of wave C. The last five waves are an Ending Diagonal on the SPX, and count out in a similar fashion on the /ES. The lines on the /ES have been extended to show how they meet up with prior turning points. It's just something I've often found interesting.

The /ES chart above does not really look like a diagonal like it does on the SPX so to further clairify the ED I made two yellow lines. The other lines come from other significant peaks, and fall right in line with the ED trend lines. This is why I often leave old trend lines on my charts.

The Fibonacci Spiral also falls in line with the peak.

Below are two ways of counting the final waves. The staight count is mine, and I saw the Ending Diagonal on Daneric's site. Since an ED would be a more fitting end to this wave I think I prefer Daneric's count. 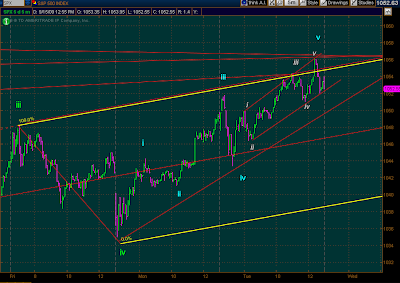 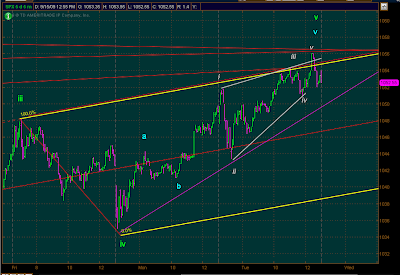 Either way we end up in the same place.

You may have noticed that I've not been entirely committed to this count. The after hours market has made significant gains and appears to be making a small triangle. 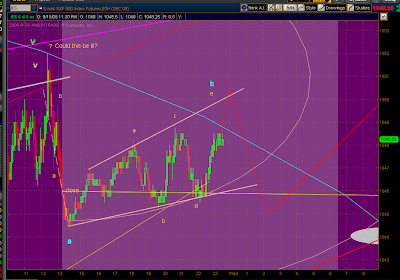 While it is possible that the wave I have labeled "a" has five waves it appears to be a three wave structure. This leads me to believe that we may have only completed wave 3.

We may see higher prices in the morning.

Posted by Robert Campbell at 19:05