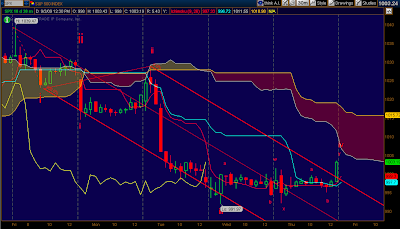 But I'm comfortable with this count. The daily chart shows the price below both the Tenkan-sen and the Kijun-sen. This has given a caution signal to the Bulls, and when the price falls below the DailyKumo at about 943 the Bears will be able to fully relax.

The Daily Kijun-sen at 1004 and Tenkan-sen at 1016 will also offer resistance, so even though there is not a great deal of resistance near by, there is some resistance built in where we need it.

995 is the level for the Bears to break. That will overlap wave one of what I'm labeling wave C. This will be a good signal for the Bears, but the market will probably bounce at 980 so a little reserve should be shown. Remember this will only be the bottom of wave iii. 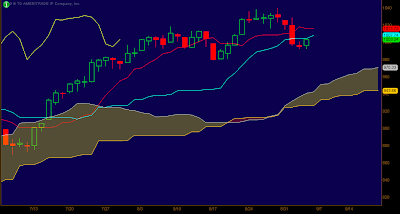 If I'm right, and I think I am; we will bounce off 980. That will complete wave iii. Then we will correct back to about 1000 during a larger degree wave 4 correction before commencing wave five down to the familiar 956 area to finish wave one.

I apologize for not referencing wave degrees, but at this point its hard to say; we have a long way down ahead of us, and who can say what degree this little blip will turn out to be.

By the way I could use some help. I'm wondering if anyone else is posting Elliott Wave with ThinkOrSwim... If so would you please let me know so that I can see what they are using for notation colors. I love this program, but I'd like to find notation that works with a colored background. Oh... I guess I could use a white background, but that's so boring.


Let me leave you with this to think about. As you can see in the chart below we broke the trend line. So it's fairly clear that we are finally in P3, but the above count would be invalidated if we overlap 1013. 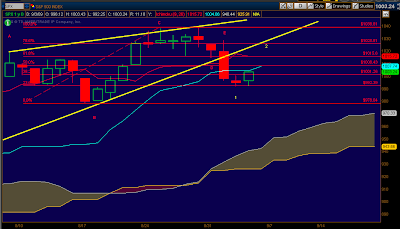 That would not necessarily be a bullish sign. If the wedge as shown above is correct, we would only be in wave one, and a 78.6% retrace to 1026 or higher would still be OK.

I hate putting my stops out that far, but seriously; I think it's in the bag at this point. This has got to be P3.

Good Trading to you!

Posted by Robert Campbell at 14:11