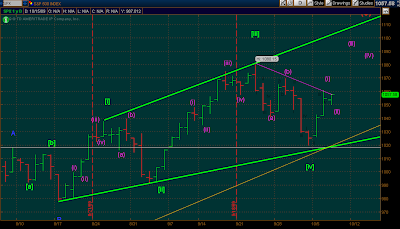 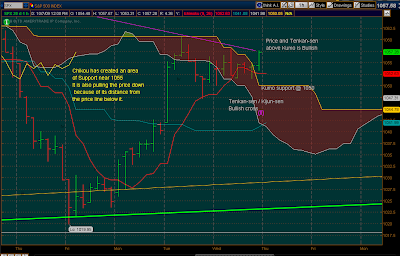 Notice the way the price was rejected by the Flat Top of the Kumo. The Kumo did offer resistance along its edge but eventually failed, breaking though the Kumo at the sloping area which offers less resistance/support.

The Kumo is becoming wider, and it will attract the price towards it as the price moves further away.. The thicker the Kumo the higher the attraction.

The Chikou is above the the price which is a Bullish, but the Chikou has quite a distance to the Price Line below it. This is creating a small amout of downward pressure and adds more to the Bearish argument than the Bullish influence I just mentioned.

Overall I'd say this chart is giving a buy signal as the Tenkan-Sen / Kijun-sen cross, and the position relative to the Kumo are the most powerful of all the indicators.

So having said all that I do want to mention that Alexander at AMBG Trading is short. His secret method has been right on for some time now. Since I'm caught in a short position I hope he is right! He is looking for a major break to the downside.

Posted by Robert Campbell at 15:22