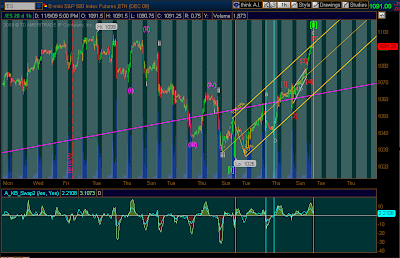 I've heard it said that whenever EWI has a Free Week the Elliott Wave fails to perform.
But I'll be honest. I'm loosing my confidence in Elliott Wave Theory, and I've been a Elliottian since the early 1980's.

The chart above shows the point at which MoneySpy would have us Long or Short. The points at which to take profits is less defined. While it is always a gainful trade to exit at the turning point, that method often misses a good portion of the run. The current state of MoneySpy appears to be close to issuing a Short , but until the line is crossed it only shows that money is coming out of the market.

But I'll ask you; what's better? EW which even after the wave is complete leaves the pros debating, or a system with a high percentage of profitable trades with clear cut entry and exit points? I used to put all my faith in EW, but now I'd rather make small profits on a regular basis instead of consistently loosing money, and telling myself I'll do better next time. OK I'm feeling bitter about my recent performace. But the biggest problem I have with EW is that the stops keep getting moved. It always appears that there is another scenario that will work out.

Anyhow I've numbered this chart with what I see as a possible EW count. I'll be looking forward to Kenny, Pedram, and Rich's counts. Of course the stop is at the recent high of 1099 /ES. By then I'll be broke. Just kidding but I will be painful.

The Andrews Pitchfork and MoneySpy. Stochastics, MACD ADX/DMI and Moving averages are something you can depend on, and are clear cut, with no interpretation required.

We are now at the top of the Pitchfork. This indicates that wehave a VERY high reliability factor that the market will turn down, but until the lower trend line has been significantly breached, shorts will be a high risk position. 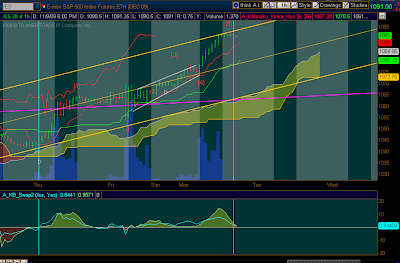 Posted by Robert Campbell at 17:09