Technical Analysis is currently adrift with conflicting and non-conforming data. But we continue to do our best to make some sense of it.

This first chart is a 5 minute. You may notice MoneySpy at the bottom does an equally good job of predicting turning points with even this short time period, and is indicating a possible peak. But my rule is to wait for the cross before initiating a position. Besides the Vervoort Crossover has signaled a buy.

I've labled the wave count as I see it, but after looking around at other blogs it's clear that we Elliottians have no clue right now. Everything from P2 peaking at 1158 to my bearish scenario.
So it's nearly worthless to count the waves right now. The only value might be placing stops but with so much confusion it would just be guess work. 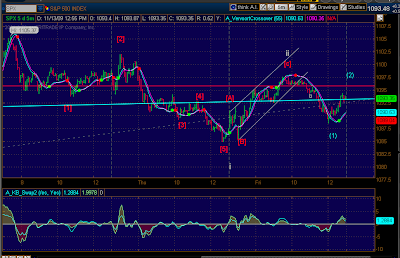 This next chart is the one hour chart that I like to rely on. I really thought it was going to issue a sell signal, but while it's close it's not there yet. The lower graph is something I've been working on. It uses $TICK to alert change of direction. It's still a work in progress.

But as we can see the Ichimoku has issued a warning to the Bulls with a Bearish Tenkan/Kijun cross. With the Kumo offering support below at 1080 SPX it remains a Bullish chart.

I had hoped to write something inspiring, but MoneySpy did not issue a sell, and everything else is only offering hope to both the Bears and the Bulls alike. Even the Andrews Pitchfork has yet to be violated enough to confirm a change in direction. IMHO this is one of the best indicators.

Posted by Robert Campbell at 11:31