My indicators are all in conflict. Basically putting them in a neutral state.
With the Bollinger Band as wide as it is I'm not expecting anything drastic unless we drop below 1097, but I doubt we can drop through all the support at 1100.
Support will weaken on Friday Morning. If it's going down it will probably happen then. 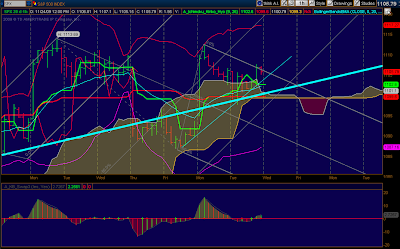 NASDAQ Composite
9:10 PST
The opportunity to breach the Kumo was missed this morning, and now the market is getting squeezed.

A lot of support at this level would make a break below the Kumo very significant as this support would become resistance. 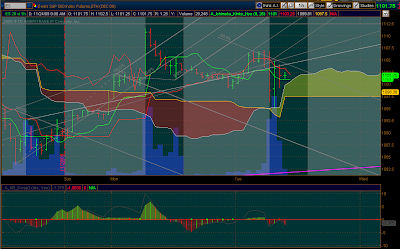 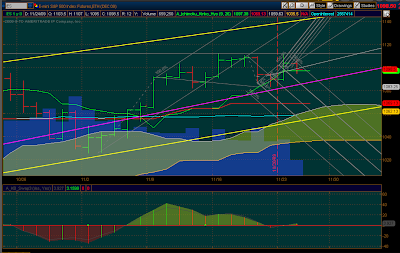 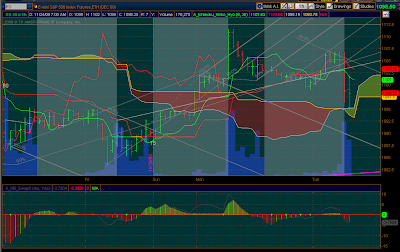 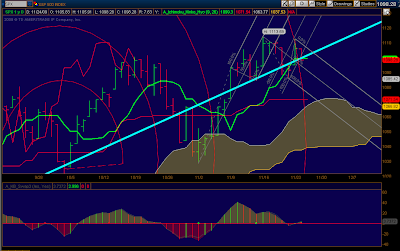 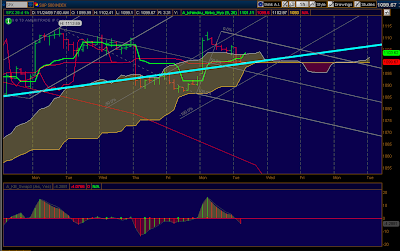 The hourly charts on both the /ES and the SPX have slipped below the Buy/Sell line. Daily charts have yet to confirm the larger trend.

Even after extending the Bullish Andrews Pitchforks they have failed and given way to the Bearish trend lines.

The Ichimoku charts have become neutral to somewhat bearish. The Tenkan-sen offered support on both the Daily SPX as well as the /ES.

The Kumo on the Hourly /ES chart held support at 1095 and the Tenkan-sen turned the bears back on the SPX chart.

The Bulls are in serious danger of loosing the battle at this point, but resilience has been their trait and this state of flux will have to play out before this round can be called.

Posted by Robert Campbell at 07:06