It's no wonder that TA Bloggers have been hard pressed to call a direction. The past 17 trading days have bounced between 1085 and 1115 essentially going nowhere.

The 30 minute Bollinger bands have narrowed, and so we are likely to see the market once again erupt with volatility in the very near future.

MoneySpy is not giving a solid signal. The /ES is Bullish while SPY is bearish. I'd like to see both giving the same signal. Tonight the /ES is moving up but MoneySpy is falling, and almost ready to join SPY in a Bearish indication. From an EW point of view I would assume we will go lower in the morning to finish wave 4 before completing the C wave with the fifth wave. This may seem contrary to the action tonight but with MoneySpy going lower it makes sence the we will bounce off the lower Pink trend line to finish wave 4.

The next two charts show some interesting trend lines. The first from March 2009 and November 2007 can be seen intersecting very close to where we are now.
The next shows trend lines from 1995. 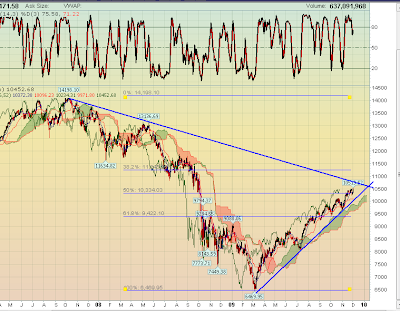 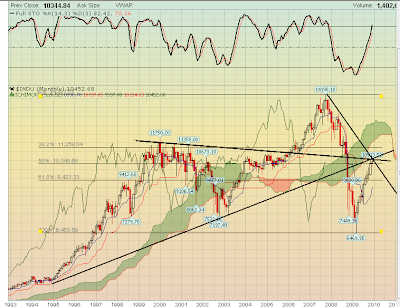 So while it appears that a reversal is bound to happen in the near future, it's not exactly in the bag just yet. I suspect we will still see 1120 SPX.

Posted by Robert Campbell at 21:14