17:00 PST
I spent some time looking at Rich's site to understand what he was saying. Rich, it would be so much easier if you would not cut your charts off.

Any how, I found a chart from a couple days ago with a wider view, and was able to put this together. I also noticed that Kenny was calling B wave in the same place as an Alt Count. Either way the Elliot Titans appear to be looking at a very large advance from here unless we get a failure. From my point of veiw it's good to know this because I see a huge move coming, and while that move appeared to be up - it just seemed to buck all common sense. But the Daily MoneySpy is Bullish, and I've got to follow the indicators that have been working for me.

I asked if anyone was interested in TOS scripts, and I think seven people said yes. Nobody has ask to join the Blog. What's up? You guys see my indicators which have been changing and never ask what the new lines and dots mean?

I guess you just want the bottom line. Maybe I should just post one liners. Bull! or Bear! and leave it at that.

13:00 PST
I have been studying volume theories. I have to say it seems more involved than learning Elliott Wave, and that's no small task.

So here's an On Balance Volume chart which I've attempted to line up with each other. Now it appears that throughout the day more shares were traded on negative price moves than positive price movement.

So one school of thought is that the market markers are buying the dips with expectation of higher price. I still have a lot to learn about these methods of looking behind the price to see what the market makers are doing. I'm hoping that I might get your feedback and maybe find someone else who would like to pursue this study.

Here is a link to one of the most intense studies of Volume and Price you may ever find .

All of the information contained in this book was taken from the Technical Analysis
Indicators in the Tradeguider® software. 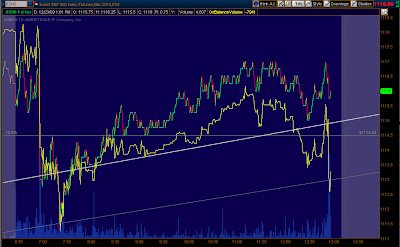 11:00 PST
Going with Kenny's Bullish EW count, I've projected the Andrew's Pitchfork to show what might be expected. The highlights are based on Fibonacci ratios. 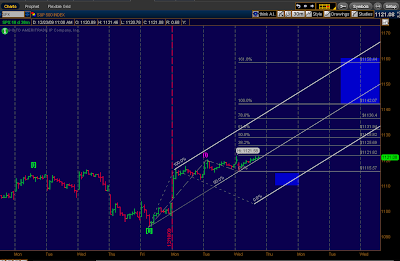 09:45
In this chart I'm projecting a possible path based on Fibonacci and Andrew's Pitchfork center lines. Earlier I made reference to Eric and Riches charts. Dan's chart was of the Transports and does not apply well to the SPX. And I can't tell what Rich is saying.

It appears that Kenny has a very bullish forecast that makes sense to me. As long as we stay in this blue Andrews Pitchfork it looks like the Bulls will be in charge.

With pressure continuing to build on the Squeeze chart, I tend to agree with Kenny's forecast. If this is only a (wave 1) then (wave 3) would be the move that blows that pressure off.
So if we do follow the red fork it may be Kenny's (wave 2) 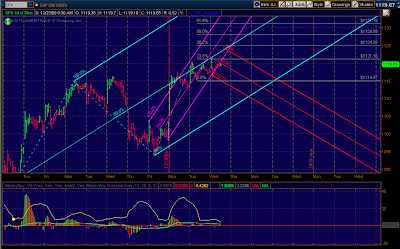 09:10
It appears that the EUR/USD may have made a bottom. 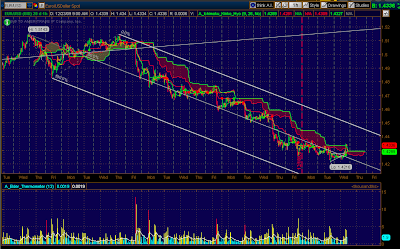 08:30
I have replaced the previous chart. I did not like the blue fork I had draw. This looks better to me and is the same fork I have been using. It's obvious that breaking the magenta fork will only be a small victory for the bears.

The magenta fork may hold the Price up today for what I would count as a fifth wave of C. This would be the end of P2. I think Daneric and Rich have counts to support that.

I'll be watching the forks. If the magenta fork is violated then I would say the Bulls have lost, but they still have a back up with the blue fork.

MoneySpy is still above the line.
Ichimoku is Bullish and sitting on the Tenkan-sen's support.
PPS is bearish
Stochastics overbought
and the ADX/DMI is bullish.

So it's mixed, but the forks will tell us the trend. 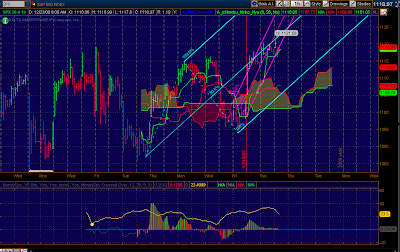 Posted by Robert Campbell at 07:12