The S&P appears have further upside, I'll have more tomorrow and an expected daily range for Tuesday at about 08:00 PST.

The Euro appears to be headed higher. 1.4515 is my preliminary target quite possibly higher. Further study is required before I can ascertain a more accurate target. Plus I feel that the fork is still developing. A break below 1.4392 would set my lower target at 1.4360, but we are currently at the lower limits and a bounce is expected immediately from the current price of 1.4408. 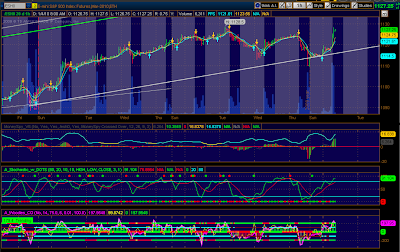 All indicators gave a buy signal at 23:00 PST .
Woodies CCI gave a perfect Zero Line Rejection "ZLR" just prior to the open on the M30 chart (NOT SHOWN).
MoneySpy and PPS gave buy signals at 02:00 EST.

The Bears failed to hold 1120 ESH0 but this is what it's going to take to finish the Bull's run. As you know I've strayed away from the Elliott Wave Count for some time now, But as I mentioned before it appeared that we were missing one last wave.

The pressure I have been speaking of has been released. It will be interesting to see if this is all there is or if the pressure builds again with a reversal. 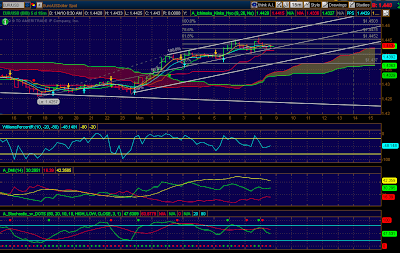 The EUR/USD is in an upward pitchfork. The Inchimoku is showing Kejun-sen support at 1.4413.

Posted by Robert Campbell at 07:46