I predicted a peak at 1.3640 but the EUR/USD appears to have peaked at 1.3626. This is where we need to be cautious. Until the lower tine of the Magenta fork is broken Price could still break the cyan fork, and the Bulls would take the Euro higher. I belive Price will now begin to descend to the lower tine.

18:00 EST
I expect the EUR/USD to peak tonight at around 1.3640 before resuming it's downward move inside the fork. Be cautious of a breakout if the blue handle is violated.

16:59 EST
Today's Black Doji formed a Bearish Harami which requires a Black Candle Stick for a Bearish confirmation.
The Andrews Pitchforks performed very well today as did the Woodies Pivots. 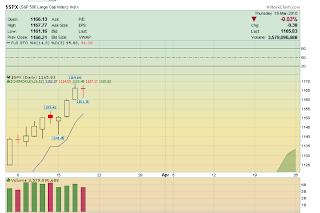 You may have previously seen a screwed up count where I had mentioned a triangle. After looking at it again I saw the error and quickly replaced the chart with this one. 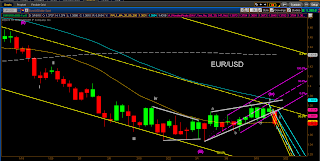 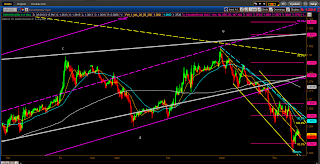 Further work on the forks and Fibonacci ratios leads me to this refinement.
It's not often that these forecasts work out exactly, but here's the basic idea
I've drawn this cyan fork, and while I would prefer that the top come in at the 0.0 top tine; by extending out to -0.5 it works very well. 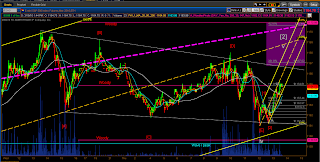 12:00 EST
A midday update. Currently at 1162.25. We are slightly lower than the bottom tine of the intermediate fork of the 4th degree (yellow fork). This is where I would expect wave v to begin. If the 3d degree intermediate magenta fork is violated at around 1154. I would look to the 2nd degree white fork for support at 1158. 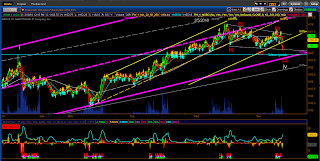 The DDF is expecting a Bullish Bias for the day.
Watch the Woodies Pivots and the Andrews Pitchforks today. I feel the a chance of a late afternoon rally into wave v.

On the M60 charts:
MoneySpy is wavering over the zero line.
PPS is Bearish
Heikin Ashi is Bearish
MOBO is Bearish
Ichimoku is Bearish

Yesterday's white candle is a continuation, but a Deliberation pattern has formed due to the upper shadow which opens the possibility of a short term peak. A black candle today would give that signal. But even a long black candle closing below 1144 would still require a confirmation of a reversal. This seems to fit well with the count I've provided on the /ESH0.

The Kagi chart requires a break below 1160 for any sign of reversal and a break below the 1140 area is once again the key level before the Bears gain a confident control. 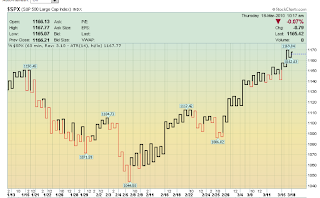 Posted by Robert Campbell at 06:57