Below is a chart of the /ES with a an EW count similar to the count I proposed earlier today for the SPX. 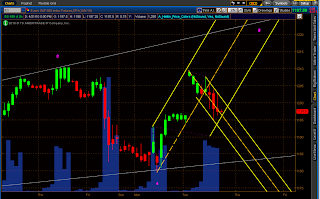 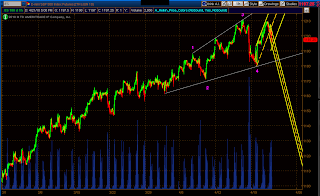 Today's Harami was created with a Black Spinning Top.
Once again the market has shown weakness,
but the candles have yet to issue a reversal.
A close below today's close would give a Bearish signal.
Can the Bears muster a Black candle stick tomorrow? 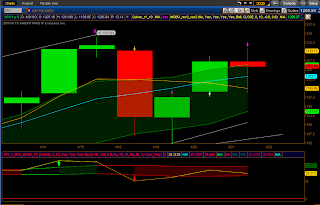 14:00 EST
I do not presume to know where the market will be next week but while waiting for a break in this Bullish mania it pleases me to muse over the Bearish possibilities. Below is an Elliott Wave count. I made no effort to label the degrees properly as it does not deserve the effort. I based the targets on Andrews Pitchforks and Fibonacci ratios.

Since nobody except the Bulls seem to have a clue, I figure this chart is no worse than the rest.

10:30 EST
DDF has a Bullish Bias
Below are two links to stories from the Huffington Post. I found both to be very interesting. There are two interviews in the Lehman story. The second is most informative. Ask yourself why our government failed to act.

The 10 SCARIEST Charts Of The Recession 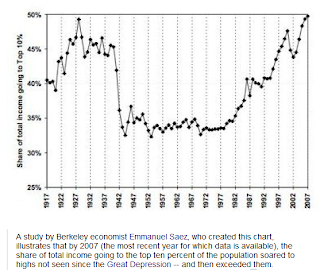 Posted by Robert Campbell at 07:06