Here is a revised Andrews Pitchfork. 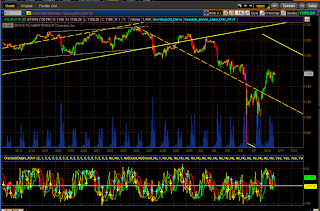 Squeeze is giving me a Volatile Market Alter 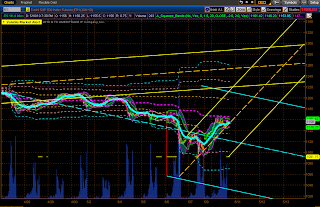 Today's White Opening Marubozu is a strong bullish candle stick, and has created a pending Bullish Reversal. Confirmation will be required from a second white candle stick, but coming off a Spinning Top and a long tail the day before adds even more of a Bullish influence to this pattern.

Price has returned to a position above the Daily Kumo which will once again offer support. There is a weakness in the Kumo tomorrow, but it has also an ascending slope which may tend to lead price higher.

The Andrews Pitchforks are also showing the battle between the Bulls and Bears, and it will not take much for either to gain the upper hand. My feelings are that if Price breaks above the 61.8% level at 1161 the market will rally to about 1187 (78.6%). But if Price follows the downward fork, and is able to break or even close near the Persons Pivot at 1133 tomorrow the Bears will be able to take back control.

On the Daily Charts my indicators are at are also at a tipping level, still Bearish, but close to giving a buy signal.

In summary there are no clear signals at this moment, but I'd say the Bulls have the favor. 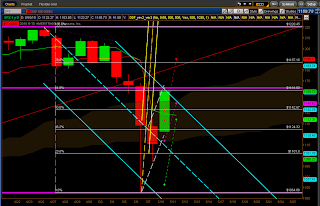 14:30 EST
Price is bumping up against the bottom tine of the March 2009 Andrews Pitchfork which is also the Top of the Daily Kumo.

The Oracle PPS and MoneySpy remain Bullish on the Hourly Chart, but there is an indication that momentum is relaxing and that a peak may have been made. But it's best not to second guess the signals until they show up. 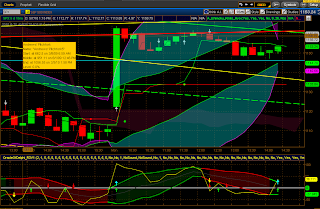 11:00 EST
I spent the weekend writing some new TOS studies. The top one is Oracle of Delphi which I did not change, but this is my best work so far. I tend to judge other indicators against this and PPS (shown as yellow and cyan arrows in the top graph).

The second study is something I call Deviated Inertia. It's based on a very complex Linear Regression algorithm that I devised. I've become very fond of Linear and Non Linear Regression, and plan to take this study one step further, currently it appears best at calling low volitility markets. My next step will be improve the function in high volatility markets like we are experiencing now. This research lead me to the next study.

The third study called Relative Volatility is based on the standard RVI. Using Standard Deviation I've been able to create a highly accurate indicator of current trend.

The Last study is based on the McClellan Oscillator. Once again I used a Standard Deviation plot to make the Oscillator more intuitive.

I'm not ready to release the scripts just yet as I want to clean up the code, and make final adjustments, but I promote Open Source, and will soon share this, and my other indicators.

In this chart below I've manually placed red & green Time Levels at the best times to have bought or sold to help interpret the studies.

If you share an interest in fractals, statical interpretation, and the creating new market studies I'd like very much to exchange ideas. Contact me through Skype at btcamp@sbcglobal.net or by e-mail. Be sure to use "Share-TOS" in the subject to avoid being missed among the spam. 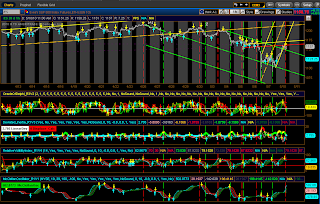 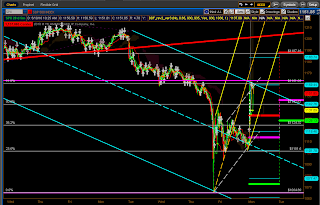 The Cyan lines are the Woodies Pivots and the Bold Red & Magenta are Persons Pivots. The Green Low Persons Pivot is not shown on this chart at 1072.

Price has recaptured 61.8% of the losses off the high of 1219.8.
The cyan fork predicted this level, now it remains to be seen if the resistance will hold or if the Bulls take the market higher.

Price is currently floating within the Kumo and at the top resistance of the Daily Kumo. The Tenkan-sen/Kijun-sen are in a bearish cross, below the Price.

The Candle Sticks are currently developing a Bullish Reversal Pattern but it's too soon to call that pattern. 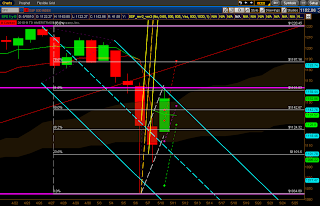 Posted by Robert Campbell at 23:39