The bulls are making the Bears work for this. Today's Black Candle fails to confirm the possible Bullish reversal caused by yesterdays Harami. We got the bounce I said was likely to happen, and now there is a really nice top shadow on this candle! Smells like Bear.

The indicators told us a peak had been made, and finally PPS confirmed with a down arrow. I'll admit this was an active morning for me, with alters ringing, and the boundaries being pushed. While I expected today's bounce I had hoped it would be less threatening.

PPS and Price below it's curve. 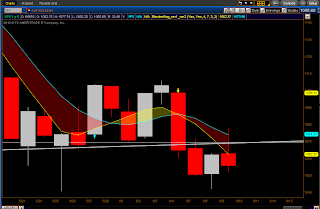 The downward forks held and today helped to confirm the Green Fork. The weakness in the Kumo looks a lot less threatening from this level but we are now at the support of the lower tine of an upward fork (cyan). It appears that there are no other upward forks in our way until around 1000. Break that tine! 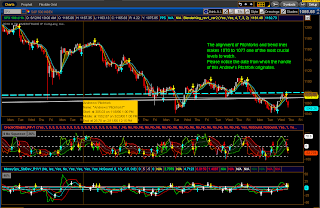 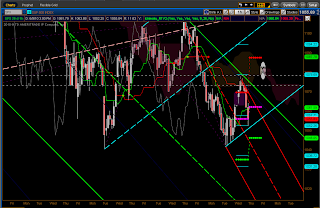 I have to go so I'll leave you with the indicators. The Std. Dev. are finally nearing overbought.
Looks like a peak of some degree has been made. Charts show Price near the top tine of the Green Fork. If the Bears are lucky, this is where it turns. DDF was Neutral so there's a good chance of that.

See you later with a recap. 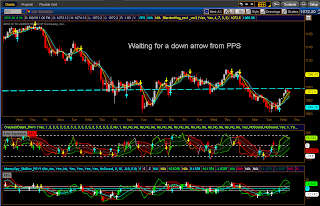 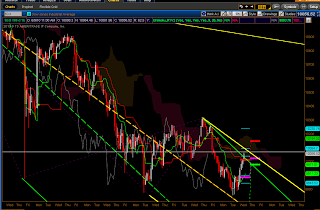 11:35 EST
The Bulls broke through the M60 Kumo
Up against Woodie Pivot & Green Fork 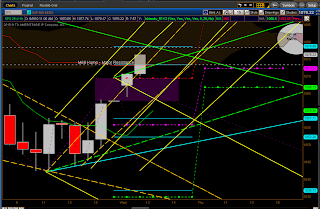 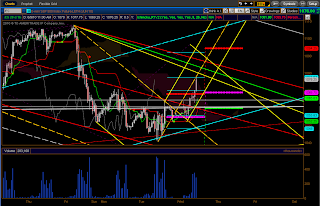 11:00 EST
This chart shows the risky position the Bears are in. The dash lines show the M60 Kumo resistance but there is a weakness in the Kumo where Price may find it's way through on Thursday or Friday. The top tine of the Cyan fork would most likely contain that advance but not until 1105 or better.

Currently the indicators are bullish. While the oscillators are fully bought the trend could continue because the standard deviation clouds are lagging and are no where near overbought. 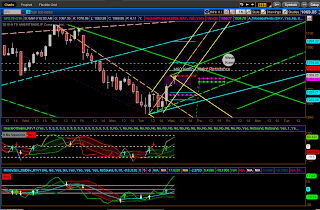 10:30 EST
I've places a purple box at the DDF Limits and a white dash line where the bottom of the M60 Kumo would sit. Adjustments have been made to the forks. Last nights recap says it all. 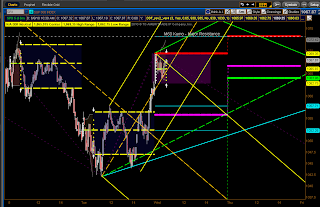 Posted by Robert Campbell at 07:31