Well it looks like the charts below may have to suffice as ThinkOrSwim has deleted ALL of my studies. Oh I have some backups, but the platform continues to crash and the technicians are out for the weekend. I have to hand it to their programmers. They have got to be the dumbest bunch of idiots I've ever had the displeasure of dealing with. It seems to me, they would test their builds before inflicting them on us.

This plus the fact that they constantly ignore the wishes of their uses, change the basic functions such that code that used to work becomes obsolete, and the platform has become burdened with it's own overhead to the point that it hardly runs any longer.

I will be looking for a new platform, possibly TradeStaion or AmiBroker. If you have any advice I'd like to hear from you. 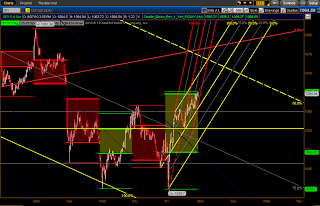 So how high is this reversal likely to go? My expectation at this point is a target within a range of 1070 - 1073 since it keeps popping up. My indicators are showing this rally to have strength unlike the rally yesterday morning before the open. Currently it would take a drop to less than 1050 to set the short tern trend back into the Bears favor, although there is a strong indication that today's burst is fading and may fall into the close.

13:40 ET
An update to the forks presented earlier shows both these forks to be valid. 1055 would place Price in the lower half of the Yellow Fork. (The first step to a bearish recovery.) 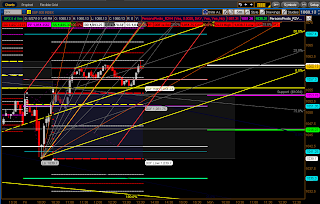 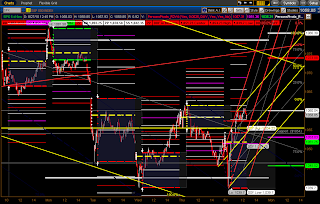 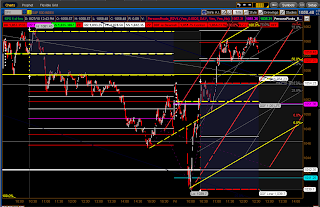 12:00 ET
Something odd is going on. I looked for news but saw nothing spectacular.
The volume on the e-mini jumped way beyond normal one hour before the open.
Then a sell off and rebound took most by surprise.

All this pushed Price slightly beyond the range of my forks. The blue fork has been violated so an upward fork may prevail for awhile. Here I show an alternate fork which I based yesterdays statement about 1000 being the upper limit to my Bearish forecast.

1080 would change the Weekly Candlestick white and as it stands now even a Black Spinning Top would place the likely hood of a reversal at 52%.

The fork from March 2009 will not come under fire until 1075. 1061 was yesterdays high and will present some resistance. A break below 1055 would put a damper on this bullish action and 1048 would set things back on course.

I realize this does present a strong conviction for the short term forecast, and leaves the Bears without a firm stop, but I don't have much more at this point. 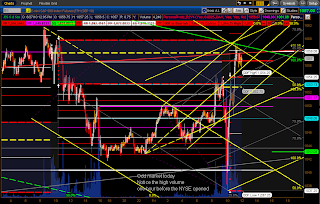 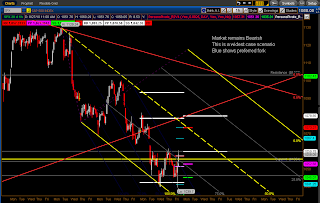 Posted by Robert Campbell at 09:38