I told you at the open that today would be lack luster. I also gave you some very specific price levels. Hope you noticed the accuracy.

Today closed with a White Candle. This candlestick technically confirms the Bullish Reversal. I say technicallly because it was back and forth today, and in the end managed to close 13 cents above yesterday's close. Confirmed by 13 cents!

I might question that reversal, except we bounced off the Weekly Kumo once again. This level was also shared by more then one Fibonacci and the green fork as well as being within a stones throw of the March 09 fork

This range is going to be difficult to break, but like I said this morning the market has run out of room, and I favor the Bears at this point. Tomorrow may find it's way to 1093. The 2007 fork is bearing down near 1115. The Squeeze may hurl the market up, but I've often noticed that type of acceleration burns out and reverses just as quick after a Squeeze.

The big thing that is silently getting stronger is the Squeeze. 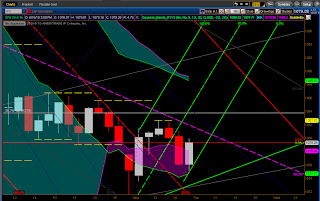 That magenta fork is all that is holding the bid down. If it breaks to the other side of that fork, there is a clear path to 1093 or 1115.

Earlier I warned of a Bullish Intra-day Candlestick reversal. Currently that confirmation is void. Last day to confirm 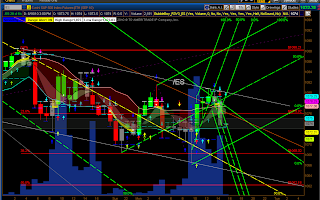 12:45 ET
On an intra-day basis the Candlesticks have confirmed a Bullish reversal.
Showing off my latest indicator, "BubbleBoy_R3V3" 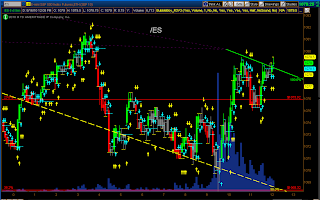 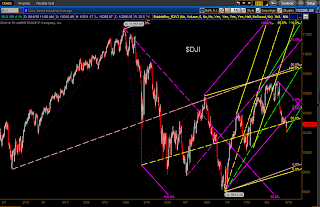 Pitchforks for the DOW

If Price does not break below 1060 by weeks end. 1095 will be tested again.
Pressure is beginning to build in both the SPX and the e-mini.
This leads me to believe the market may be ready to take the plunge. 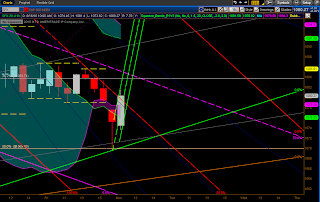 Trading should be lack luster, retracing to the 382 Fibonacci
The bounce off the green fork was expected as three Fibonacci lines also intersect this point.
The magenta fork and the red fork are both at play. Time will tell which one will dominate.
Until the orange fork from 3/09 is broken near 1065 the market will trade a range within the magenta fork 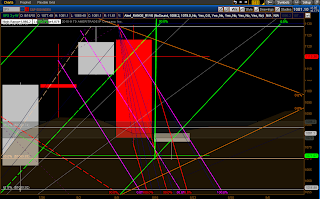 Currently Price is bumping up against the top of the Weekly Kumo, the Persons Pivot PP and the DDF high range. 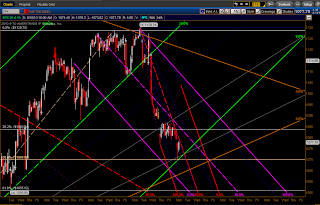 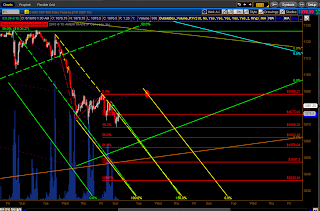 If the e-minis go much higher the top tine of the yellow fork will be the target around 1088.
That orange line below Price is the Fork from march 2009. Break the 2009 fork and the Bulls will be in trouble.

Posted by Robert Campbell at 22:25