Hope you were following along on twitter today. Tomorrow may hit the target. Price is just 0.56 handles away. I'd like to see a reversal at the target. 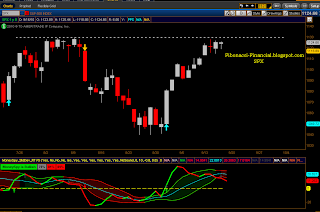 The Candlesticks failed to provide a bearish confirmation today. Once again just pennies make the difference. 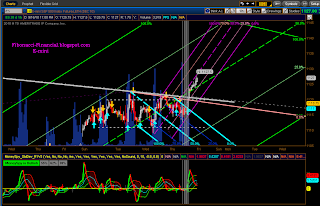 The Hourly Squeeze caused Price to shoot up through the Keltner Channel to the Weekly Persons Pivot, landing perfectly on a 1.618 Fibonacci. One small hope for the Bears

The Ichimoku is Bullish on the Hourly and Daily. Price remains above the Weekly Kumo but the cross remains Bearish. The Kumos are telling us 1044, 1066 and 1016 are key levels.

PPS has remained Bullish on both the hourly, and the Daily charts so until we see a break the trend probably remains up. 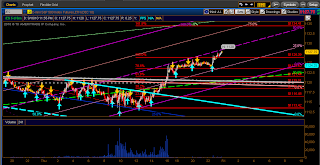 After hours e-mini has continued upward breaking out of the Cyan Fork. It appears the Bears are back in hibernation. The Forks show resistance near 1175 and 1130.

Tuesday left us with a Doji and a Harami, opening the door for a bearish reversal. Wednesday did not close below its open so no sell signal was issued, but if today closes with a black candle below yesterday's close a sell signal will be generated. Yesterdays close was 1125.07 but today opened at 1123.89 so the number to watch is 1123.89. This would leave us with a Black Opening Marubozu which has a 52% chance of follow through to the downside.

I know this is a lot of speculation, but it's better to be one step ahead than attempting to figure it out after the fact.

The forks could run either way but Price has been hugging the top of the 2007 fork for quite a while and the potential is enormous if the larger down trend should begin to gain strength. 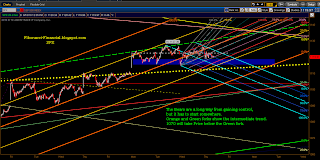 Posted by Robert Campbell at 09:11