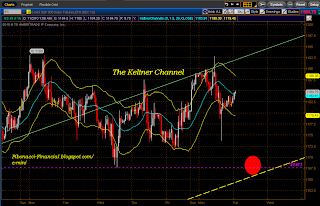 The markets a bit undecided of late, so what's a blogger to write?
Recently I've spoken of momentum failing after escape from the Keltner Channel. So why is that a signal that the market is likely to loose momentum? Let's look at the Keltner Channels logic and it's formula.

As with many indicators we start with a moving average. Then add or subtract the Average True Range.
Most of us have a pretty good understanding of what a Moving Average is, but what exactly is Average True Range?

It too is an average, but it's an average of the largest span found between High, Low or Last Close.
Think about it... Isn't that ingenious? Seriously someone had to think about a way to find the widest possible swing, which is exactly what's need here.

We take an average, and then add the average of the widest range in the recent bars multiplied by a factor of 1.5. Of course you have to sample enough bars to make it meaningful so the standard is 20.

The Keltner Channel shows us the average Plus /Minus 1-1/2 times the average range of Price around that average. 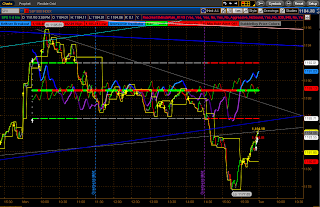 BubbleBoy, Darvas Box and 15 Minute Rule w/Awesome O and 3/10 Rule turned on!
Man if that don't tell you what's up I don't know what will.
BubbleBoy won out on the Price Color.
So what does this tell us?
BubbleBoy has gray bars so it's saying the trend is in question. Both BubbleBoy and Darvas box are breaking new highs.
Bubble Boy will reverse at 1181.45 and Darvas Box will reverse at 1177.65
On a daily chart Bubble Boy will reverse at 1177.65 and Darvas Box will reverse at 1171.70
Speaking of Daily charts, this is about the sixth Doji, High Wave, or Spinning Top in a row. The Candles went short last Wednesday at 1182.45 and are on hold while the market makes up it's mind.
The 0.8σ - 10MA Std Dev is bullish.
The 3/10 Rule is Bullish
The 15 Minute Rule warned of a false rally this morning as did the Keltner Channel.
This study shows the 15MinRule as bearish at 1185.71, but that's my interpretation, and not how Linda Raschke trades. Maybe I should rename the study to save stepping on toes.

On the Bollinger Bands, Price pushed up against the +3σ in the early hours and proceeed to fall back to -2σ by the Close.

Shown here are a couple more of my indicators. Cruiser and HisNobs dropped into the bearish mode earlier today.

Price appears to be finding support above the M60 Kumo. The cross is Bullish and the Kumo's flat bottom should offer support and 1177.93. Have you noticed how 1077 keeps reappearing? 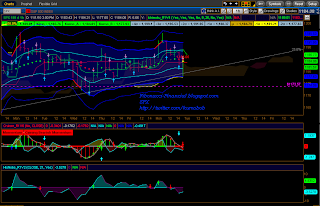 Keep an eye on the forks. We should be getting close to some profit taking, but as I've been saying 1200 area is still on the target until the fork is violated. 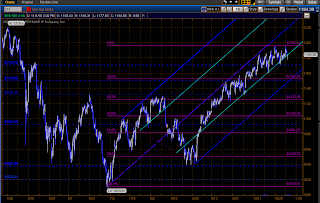 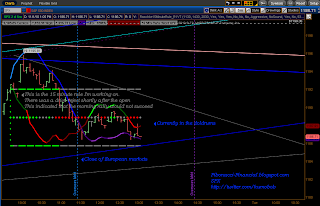 My prediction is still on track. Until the fork is violated the trend is up. But notice the weakness as Price escapes the Keltner Channel.

I would move that small blue fork in the top chart down to encompass the recent price, but I want to keep this prediction as it was the day I made it. When it's moved down the top will also line up so that's a good indication the lower position would be the correct position. 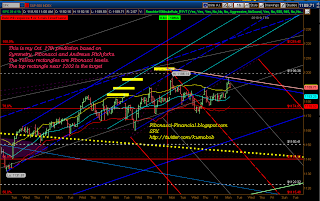 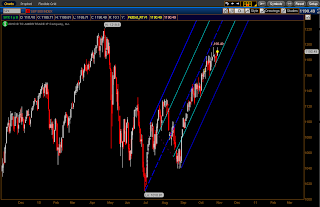 Posted by Robert Campbell at 08:26