Pretty much the same thing I showed on Sunday.
The advance did not have strong internals, and Price now sits near the resistance of these two downward forks.

The A-D line barely managed to break 1000 and the Up/Dn Vol briefly peaked at a shade over 3:1 during the last 15 minutes. AAPL was down 1.54%, as were many other leading stocks. Price is still about 15 handles above the 200 DMA so it's still a coin toss, but it does not seem to be shaping up for a powerful breakout to new highs.

The Kumo lies above with a very strong span line at 1307 but the hourly is currently ready to offer support at 1265.

The candle sticks had a confirmed buy with yesterdays higher close, but three white candles have not been able to break beyond the top of Wednesday's Black Candle. 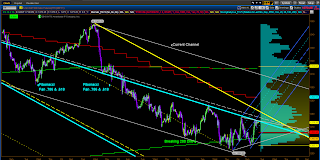 Here's an update to RIMM which I showed you a few days ago. It was down 6.7% on very heavy volume after announcing a new product release. The technicals showed the story well before the news. 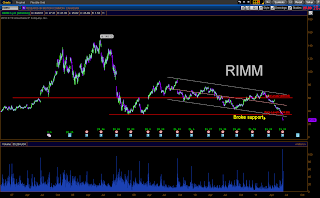 Posted by Robert Campbell at 16:45