Candle Stick on the other hand had a BUY confirmation from the Long White Closing Marubozu after a Bullish Harami caused by an Inverted Hammer yesterday.  I generally get burned when I trade against the candles but I feel better going with the Forks which appear to me as bearish .  Time will tell. 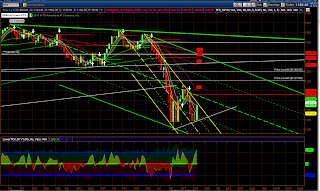 Posted by Robert Campbell at 18:57