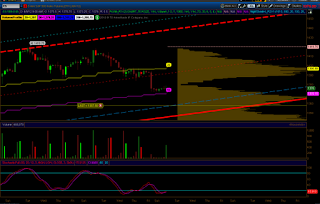 For several months I have been referring to the 20 and 50 DMA as the key levels and a peak target of 1425.   It's not that I'm a student of moving averages, but instead the Andrews Pitchforks have continued to align with the DMAs and it's a common reference.  Here again you can see the alignment.

Price is now in an interesting position.  It's below Volume Profile support and above the bottom tine of the  red fork.  It could be a test of the volume support/resistance at 1380 but this fork would suggest a decline to the lower tine of the red fork at the next volume support  (1350 area).

The October trend line has been tested several times and therefore the red fork may not offer solid support this time, but Elliott Wave Theory would suggest a bounce to new highs.  The Fibonacci area near 1425 remains my final target until a close below the red fork.

Posted by Robert Campbell at 09:28