Doug this is for you.

I don't explain what I see in my charts any more since nobody around here ever leaves a comment, but I'll do it for you. 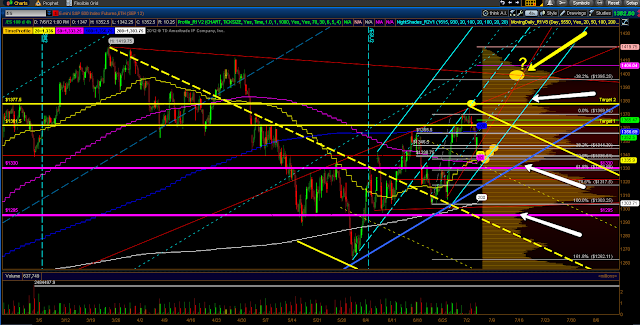 There are three forks.  Two are going up and they are blue and cyan.  There is one downward fork and it is yellow.  Notice how they appear to divide the move into an upper and lower half.  This is the way I use the Andrews Pitchforks which differs a bit from the way Andrews used them.
Here is what I look for.
The Volume Profile on the right as we talked about.  Notice the white arrows point at the low volumes.  This is where support and resistance is generally found.
I also use Fibonacci Retracement .  That the white horizontal lines.
and I use trend lines (thin red lines) and channels.  The 1377 target was off by 2 handles.  Now I'm looking for the market to target the area near those three yellow ovals on the bottom of the cyan fork.  After that if the market falls through the Volume Profile near 1333 it will most likely fall to the next low on the volume profile near 1295.

But if it recovers off the bottom of the Cyan fork  then we will head toward the big question mark (Yellow Arrow).
The market may also slide sideways for a while bouncing off the Blue Fork.

There is one more thing I look at.  That's the Elliott Wave Count, but that's a whole different game that we can talk about someday.
Thanks for the tip on Lowes 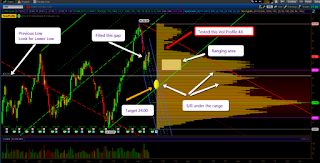 Posted by Robert Campbell at 19:48