Interesting day wasn't it?   This is going to be a very depressing post. 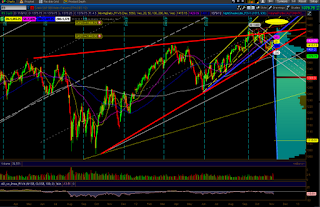 I've been showing this downward move since late September 2012! and while I have been saying 1490-1520 was possible you have to play within the forks. Fact is we did not break out of the downward fork and the upward fork has now been breached in a pretty significant way.  It's probably time to remove that yellow oval.

I've shown you the supports and resistance and they were there at every turn.   I believe we have broke all but the mother of all upward forks.  ...Yep the fork from March 2009.

So what do you think?  1350?  That's about where my 2009 fork sits and coincidentally near the peak on 6/19/2012.   I'm not great at counting Elliott waves but that looks like an important peak to me at 1357.
Dan has also been counting the wave C wedge for a long time.  Without a doubt this is a bearish pattern, and the move down through the bottom trend line should be swift.   If his count is right then a possible bounce to 1400 area before the real damage is done.

The Bulls need to pull the market up above 1440 before they can claim any real control,  and any further slippage will only take us deeper into the volume profile where the next major support is at 1250, but that's only support, the bottom is way below that.  It will become even more difficult to recover as we slip further down into this huge volume profile.

While I am short I have to say I feel depressed to think about what is ahead.  The technical patterns that have developed over the past year are in many ways more devastating than the patterns leading into the collapse in 2009.   So many people are going to be hurt by this.  I feel sorry for the young people with hopes and dreams who may right now be feeling they have some chance to create a better life.

By the way I'm pretty sure Mel made it back home today.  The past two weeks have been hard, but he would rather die at home than in the hospital.  With our best wishes he may continue to beat the odds.  But if you have been following Mel you might want to take this opportunity to let him know how he has influenced your trading, and wish him well.

Posted by Robert Campbell at 19:07