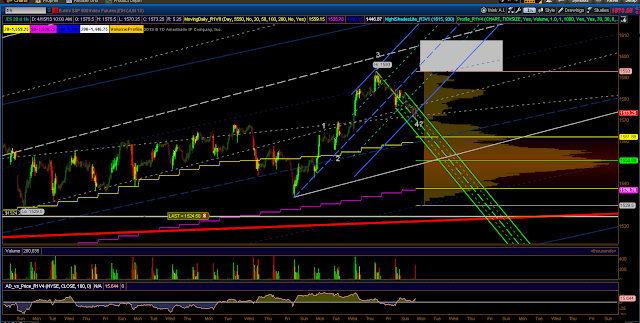 I don't claim to know much about Elliott Wave counts but this seems to fit the fork.  1570 is an obvious support due to the Volume Profile.  A break below would be bearish, but 1570 should hold according to this fork.  In that case 1598-1607 would be the target.
Should price break below 1570 the next support is at the white Andrews Pitchfork and the Volume Profile indicates 1550 support.

Notice the Bullish divergence on the AD_vs_Price_R1V4 graph.


Price broke the support at 1570. 1530 was the bottom of the previous range. Once that area falls to the Bears I think the long anticipated financial collapse will begin. Like I've said I'm not an EW annalist, but my alert has been set at 1524 for a long time. This is where I perceive the top of wave 1 which begins in late February around 1480. Breaking 1524 would give a solid EW sell IMHO. Candlesticks are short and the white and blue upward forks appear complete and violated.
Still looking for temporary support near 1530. Probably only a hesitation in a very steep decline. Next support below 1530 is 1470 then 1260

Posted by Robert Campbell at 07:46