This could easily be the top, and certainly a pull back from this level should be expected.  After all we are at resistance.  1750-1760 appears to be the top of the large channel from the 2009 low.  1860 seems ridiculous, but if market is heading for the handle of the 2009 fork, then maybe it will happen. 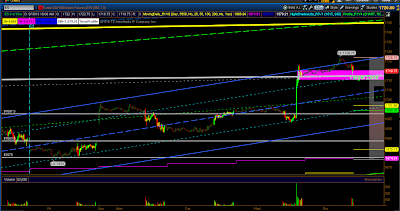 Commentary:
Bernanke is spending 18 billion a month for quantitative easing. Putting that in perspective the 1989 Loam Prieta Earthquake caused 6 Billion in damage.  Hurricane Katrina caused 81 billion in damage.  The Fed is shoving more than twice that per year into the pockets of the ultra rich.  If they were serious about turning the economy around they should relieve the common people of taxes and create infrastructure jobs.  Hell our city has laid off the police, fire and can't even afford to repair our streets.  California just caved in to big oil and will now allow fracking in order to create jobs and derive tax money.  Brilliant isn't it?  We don't have enough water as it is and they want to foul what water we have for oil.
As a California contractor I can't disturb more than 12 sq ft of a pre 1978 structure without going through HAZMAT procedures to contain the traces of lead I might stir up during a repair.  I can't even paint over that area!  Yet fracking which is known to pollute water and air on a massive scale is encouraged.
All I see is corporate power making a few very very rich with blatant disregard of everything else.

Posted by Robert Campbell at 07:14