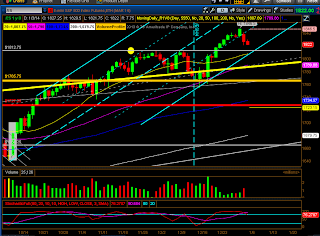 The symmetry of the cyan fork has been developing and guiding us quite well.  1812 was my target last November, and I remember feeling very certain about that level.  As you can  see it was a significant barrier.  I even left the oval on my charts.

1812 has now become support.  I don't have a strong conviction, but I feel it will hold long enough to hit the 1860 target I mentioned back in September 2013.

It's probably premature to be getting all bearish, but even though the forks have not given a sell signal I worry that the market may be near the end of it's spectacular ride.  The Market rose above the 200 DMA at the beginning of 2012 and tested that average three times over the next 12 months.  2013 placed a lot of distance between that average, but I fear that there not be enough strength next time it's tested.  Currently the 200 DMA is near 1680.  This may seem like a distant memory, but things could change very quickly.  This cyan fork may very well provide the initial sell signal.   1725 is also a strong support level.  It would be interesting if the market tested the 200 DMA near 1725.

Posted by Robert Campbell at 23:02