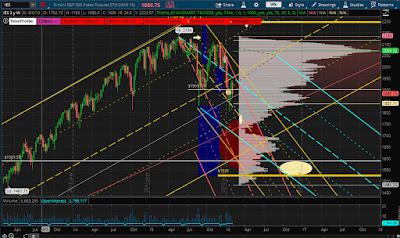 There are two yellow forks.  One is Up and the other Down.  These are the most certain.
The Cyan fork describes a longer prolonged bearish trend.  The Red fork fits better with a Wave 3 collapse.
For now BOTH Yellow forks are the solid, but what generally happens is a larger fork begins to develop.  This is why I have drawn the Red and Cyan forks.  The market usually follows the longer more prolonged path so I favor the Cyan fork, but world events cause me to acknowledge the validity of the Red fork.   Theoretically we are still bullish long term until the large Yellow Upward fork breaks.  Certainly I would expect it to offer support near the bottom tine, but this long bull ride is long over due for a catastrophic collapse.
The rectangles are how I calculate Fibonacci targets,  The ovals are targets.  The arrow indicates when the Syrian War flared.  This would normally be good for the market, but I think the tide may be turning.  New World Order (NWO) will not necessarily be good for the markets.

The push to frack oil was part of the NWO plan to destabilize economies and the equities market. Refugees are being used to devastate Europe's economy, and create tensions between Christians and Muslims.  It's is all part of the Zionist plan.  By the way - Boko Haram and DAESH are not Muslims.   They are a product of Israel.  Be ware of false flags. Don't be mislead into hatred of the wrong people.  WWIII is close at hand, wouldn't it be great if all the people of the world chose to tell the Zionist elite to go fight their own battles.  We have the intelligence to make better choices.

Posted by Robert Campbell at 10:22