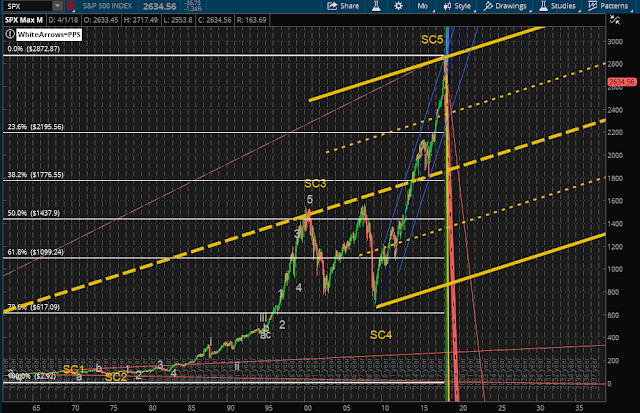 There are some interesting correlations with the fork and Fibonacci ratios going all the way back to 1933 when the SPX was at 4.41 after having fallen from 31.86.
This fork is drawn from 4.41 in 1933 to 2872.87 in January 2018
Notice the handle of the fork comes right in line with the 1999 peak labeled SC3 (Super Cycle 3).
Also take notice of the way the Fibonacci Ratios line up!

I respect the PermaBulls,  and don't wish to quibble about the numbering of the Super Cycles because it's obvious that the low label SC4 is a Super Cycle low whether it be SC2 or SC4 doesn't really matter right now.

What I really disagree with is the way they only see 4 waves up since 2009. I get that Wave 1 doesn't appear the have a clear five wave count on this weekly chart above, but all five waves are clearly there on the daily chart below.  Just my opinion everything fits perfectly. From Fibonacci Ratios and Andrews Pitch Forks to Elliott Wave, everything is pointing to the end of this Super Cycle. 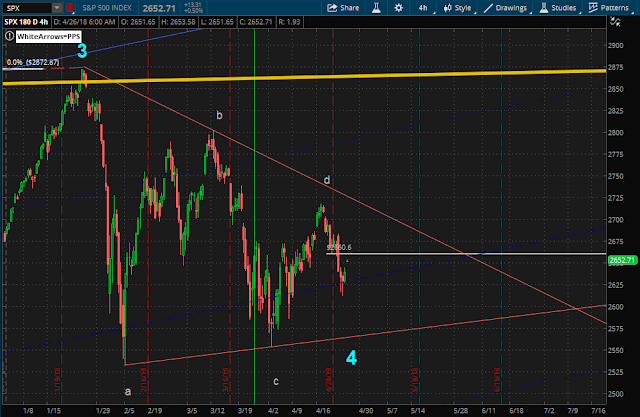 If this is a Wave 4 correction it appears that it is setting up like this.  Each of the waves do appear to come in threes so it could very well be a 3-3-3-3-3.  This one is going to be difficult to figure out until it's too late because three waves fits for both bulls and bears.

Posted by Robert Campbell at 17:13