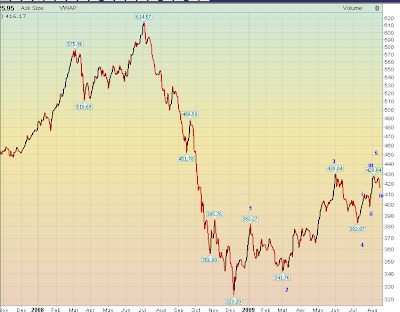 Consumer Confidence is in a wave 3 down. This should fuel the Bear market.

Things are looking good for the Expanding Triangle presented in recent posts, but even though we turned right on que, the count is a mess. There was a strong push by the Bulls during the last few minutes of the day, so it may still be viable. I just don't know how to count it.

But just in case we head down on Monday I have a Bearish ALT count. I like the way this counts out except we have to go with a five count on the last wave up to 1018. Rich did show an acceptable five count, but it seemed a bit forced. This count falls into place beautifully, and so it's seems to be as likely as the Expanding Triangle count.

Rich also has another scenario which would take us higher. It's worth keeping in mind. 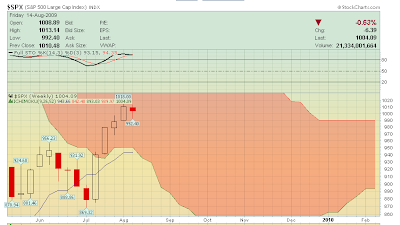 The weekly Ichimoku Kinko Hyo Chart shows a tremendous amount of resistance at 1030. A flat top Kumo indicates very strong resistance. This cloud is as going to be like a brick wall. Also please notice we had our first down week since the July rally began!

The Daily chart is also beginning to give the first signs of a Bearish turn. The price closed below the Tenkan-sen. Also today made a lower high as well as a lower low. After weeks of up days in a row we are now seeing a mix of down days.

I don't have an opinion about Monday's direction, but there is little doubt that the Bears will soon be in control. I took a small short position, and plan to add to it if we go higher, If we break 990 I'll be all in.

Keep in mind that the Kumo is going to offer enormous restistance at 1030, so there may not a lot of upside potential left.

Posted by Robert Campbell at 18:13