Currently the "True-Value" of the SPX is less than the Price by $4.00. That's my term, and the algorithm is known only to me, but my prediction is that Buyers will continue to buy at slightly inflated prices for a short while on Monday, and aside from the morning lemming rush, Volume will be low (the stops still need to be filled as usual) . Topping at about 1082 /ES, Sellers will break down, and Prices will fall on gaining volume. Should the 1082 level be breached I would be cautious with short positions as there is little resistance until 1092 /ES.

You may have noticed I have moved away from the Elliot Wave. I'm still a believer, but sometimes it becomes impossible to know if the count is correct.

I've call upon other technical indicators. MarketSpy is something I have been developing for at least 2 months. It is giving me a better grasp of the market than EW right now, and so currently I'm more into calculations, algorithms and scientific method than the nature of human behavior.

EW will gain it's footing in time, but there is a transition going on and it's not easy to count the waves right now. Fibonacci ratios suggest that there is a chance of higher prices. But most of us are traders, and only care about the intermediate general trend as a backup.

So right now we are on the precipitate of the market making a decision. We know it will eventually be down, but short term is on the line between new highs or a sudden crash. MoneySpy has a weakening hold short on the M60, the Daily is very close to a sell. and a hold long on the weekly. I'll try to keep you updated as best I can, but I've got a real job to play at too.

Below is a succession of my MoneySpy charts.
M30 (which is close to crossing the buy/sell), the M60, and Daily charts 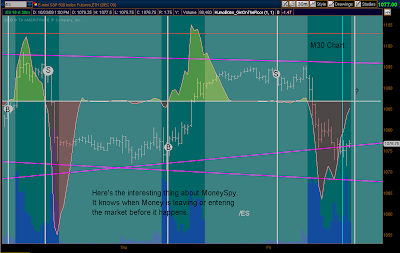 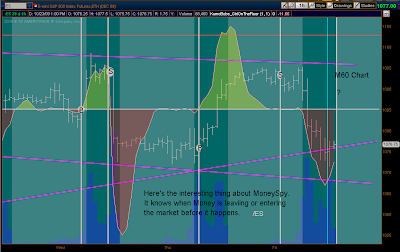 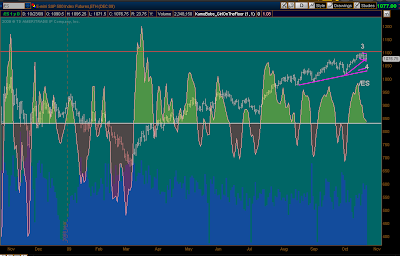 These charts indicate to me that it is possible for a rally to new highs, but I'd rather be a Bear than a Bull right now.

Currently on the M60 Ichimoku Chart the Tenkan=sen and Kijun-Sen are at par. Both are below the Kumo with Price below them. This is a Bearish Chart to be sure. But the trend line from 10/2 has caused the price to pause, and it will be a significant break if the market falls below it.

The Awsome Oscillator on the lower chart is basically the Elliott Wave Ocsillator on acid. The thing to notice is the divergence from the last high. (sorry I did not mark it, but I'm sure you will see it) This could be a warning that higher Prices are in the near future. This divergence was also found on my MoneySpy chart, and so I'm a very cautious Bear, but a Bear by all means! 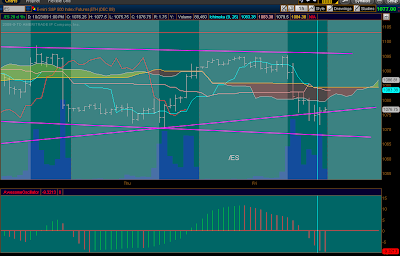 Posted by Robert Campbell at 21:30