The Bulls are back 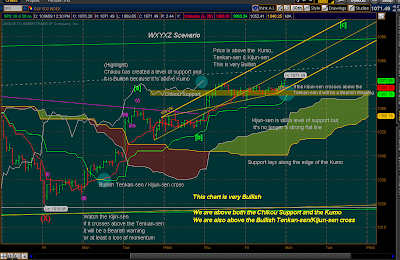 This Ichimoku chart agrees with the Elliott Wave. The WXYXZ scenario is in play.
Since the Kijun-sen is closing in on the Tenkan-sen it will be important to watch for a Bearish Cross which could be the first sign of a reversal. It should coordinate with the the end of wave Z.

Some other indicators are showing signs of weakness. I'll get into that later this weekend.
Meanwhile it appears we will still have more upside to explore on Monday.

Posted by Robert Campbell at 22:21