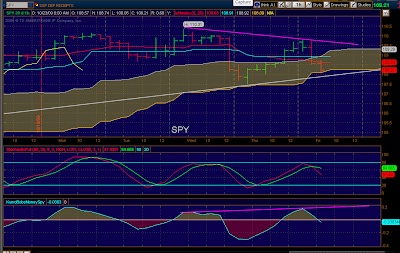 There is a bearish Tenkan-sen Kijun-sen cross, but until the price falls through the Kumo it is only a warning to the Bulls.

Stochastics appear to have peaked and MoneySpy has broken below the Buy/Sell line. But there is a Bullish divergence on the MoneySpy which could indicate that the market is not as weak as it appears.

But, overall this looks Bearish. The Bears will have to push just a bit harder if they wish to gain control. A break below the nearby trendline would send these indicators into confirmed Bear trend, and create a line of resistance above.

Posted by Robert Campbell at 08:34