16:04 PST Update
I was looking at the weekly chart and this rhythm pop out at me. It looks like we are due. 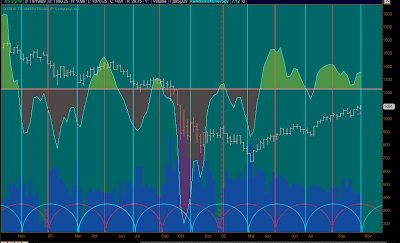 This 60 minute chart below appears to be peaking, but it's no over till the histogram goes red. 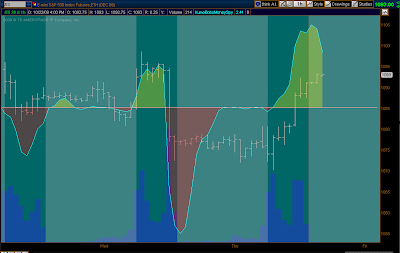 13:47 PST Update
The daily MoneySpy has turned up before giving a SELL signal. I wondered why it had previously appeared to give a SELL signal, and so discovered an error in my code that gives a false reading on the current period. For short time frames that's hardly noticeable, but on a daily or weekly time frame it shows up. 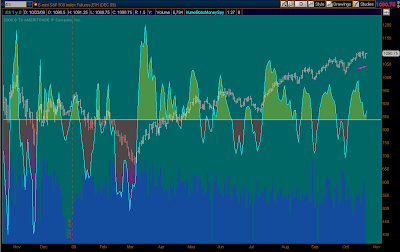 12:30 PST Update
This is the 30 minute Chart. I don't yet have a feel for which time frame is best for day trading, I guess it all depends on how often you want to trade in and out.

This 30 minute chart indicates a top could be very close. My intention for this indicator was to buy and sell at the zero line. But as always I'm trying to stay ahead of the market.

The Daily Chart shown earlier has not changed. It is still indicating a Bearish move ahead. 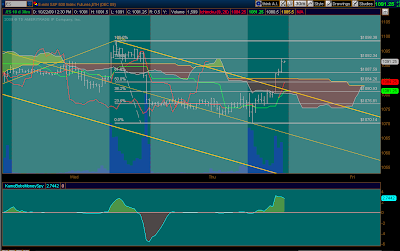 12:12 PST Update
While my MoneySpy has not actually given a sell signal it does appear to be topping. This is not the way I would normally trade with this indicator, but we have also made a nice 5-3-5 wave and we are up against the Kumo. So it might be getting close to a reversal. 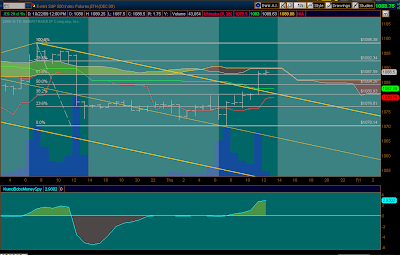 Update 11:19
Ichimoku chart back in Bullish stance. At least the Price is above the Tenkan-sen and Kijun-sen. To be accurate it's just a warning to the bears. It would be Bullish if it were above the Kumo.
KumoBobs MoneySpy continues to support the Bullish move. This indicator is fast and, ahead of the market moves so I'll let you know if it turns. By Bullish I'm talking possible day trade moves not long term.

I've also noticed that my indicator works well with divergence. Notice the previous peak and how the price has not reached yesterdays high. This is a Bullish Divergence. 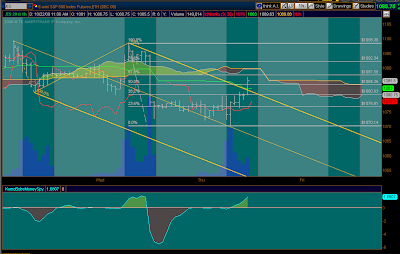 09:50 PST Update
Ichimoku remains bearish but Price over Tenka-sen is a warning.
Support from the flattening Tenkan-sen is at 1076.
Added support from the Chikou in this same range.
The Pitchfork is slightly off. We are still inside. 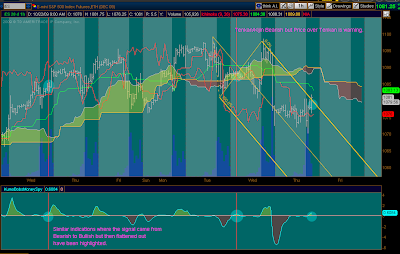 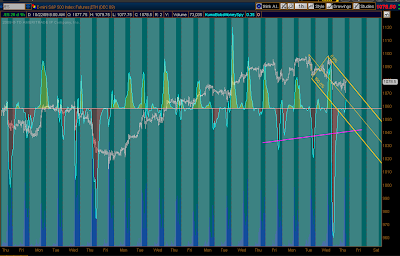 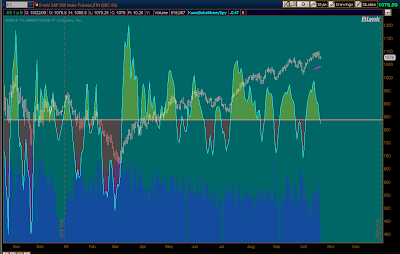 06:38 Update
My algorithm has given a buy signal. Let's see how long that lasts. This is probably just a wave 4 correction so it will be interesting to see how it handles it. 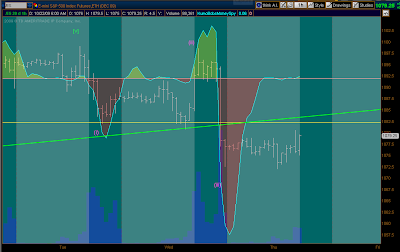 I'm still playing around with the finer points and still tweaking the code so we will see. It's sliping back and forth over the buy sell signal line. Below is an updated chart just minutes later. I've renumbered the EW as P2 complete. That white trend line still needs to be broken for confirmation. There is a typo in the chart below. It should say 1068 not 1078. 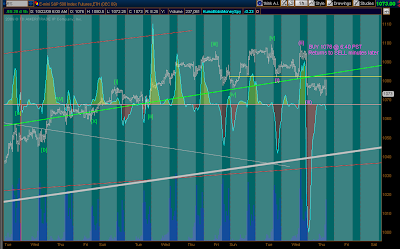 Posted by Robert Campbell at 06:38