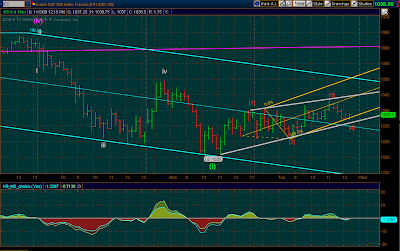 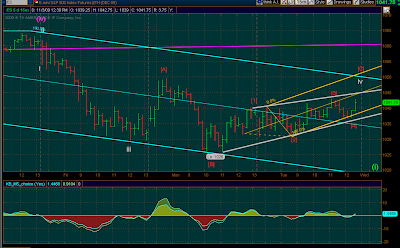 This second chart (above) is just a long shot and not my first pick. The degrees are off on the wedge. The problem with the LD idea is that it should be a 5 count on wave 1. 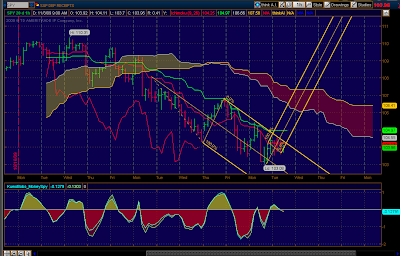 Ichimoku has a bearish Tenkan/Kijun cross with price below.
The flat Tenkan-sen and Kijun-sen have become support/resistance.
MoneySpy is also going Bearish with a cross below the buy/sell line. Since this hour has not closed this is still open to change. The M30 chart has waffled back up over the line.

I've felt a sense of ownership after so much work, but I'm going to share with you the formula for MoneySpy as I am not able to keep you updated with charts. I worked at this for quite a while to find a relationship with the money going into and out of the market. After many failed attempts I found a way to account for the stocks at each volume they were purchased. Basically I thought if one share is purchased for a $1.00 and the next purchase is four shares at $1.25 then the average price is 5 shares for $6 or $1.20 per share. I called this the True Price.

The next thing to do was compare it to something else to find a relationship. I tried many ideas like dividing the average and averaging the results. It was basically trial and error until it looked like it was working.
Finally I discovered that subtracting the average price from what I am calling the True Price and plotting the chart you get MoneySpy. I know this sounds simple but let me tell you it was not that simple finding it. Since I'm a big fan of Fibonacci numbers; I chose numbers like 3,5,8 and 13 for the longer MA. 8 worked out pretty well but eventually 10 worked out better. So here's the formula.

But here's the thing; over the years just about everything possible has been tried. Recently while looking for ways to account for strength and interest in the market I discovered that the basic idea for MoneySpy appears to have been used back in 1970 by Buff Dormeier. Buff did not stop with this basic concept. He also continued to massage the data with more formulas, and finally in the end he multiplies several components to arrive at what he calls the VPCI.

I'm pretty sure I have understood his entire formula, and have added a second cloud to my charts to show the effects of his more robust algorithm.
If you are interested in recreating this study, I would suggest looking up VPCI. I found the literature to be such that I may have misinterpreted his formula, therefore I'm going to continue to call this MoneySpy, because I don't want to misrepresent the VPCI written by Buff Dormeier. Besides Buff did not plot his chart with the components graphically separated as I have. The results are nearly the same but it seems that Buffs added components help to show diverging situations more clearly.

Posted by Robert Campbell at 09:27