After Market Close:
This is how I see the count. Wave 1 was over lapped.
We have finished below the March trend line for the past six days.
We have had 38% retrace and ended near the top of wave 4.
MoneySpy is very close to issuing a sell.
The hourly Stochastic has just crossed at the top, and has plenty of room before we are oversold.
Ichimoku:
Tenkan-sen/Kijun-sen cross is bullish but below the Kumo and Price is below the Tenkan-sen.
The price bounced off the Kumo right where I said it would try to push through. It failed to make it through the weakest section.

10:49 PST
Not much has changed but it looks like minute wave [ii] green should finish around 1066.
MoneySpy is still above the zero line.
The Ichimoku has the price pinned in between the Tenkan-sen/Kijun-sen and the Kumo. There's a weak spot in the Kumo at about one hour before the close. This is probably where it will make it's move toward the flat top.

08:27 PST
Price has met resistance at the Kimo and is above the Tenkan-sen/Kijun-sen which are almost ready to cross. This is a warning to the Bears but not completely Bullish. The flat top of the Kumo will offer even more resistance at 1071.78, which may fit well with the EW count for a fifth wave to complete a possible wave A or wave 2.

MoneySpy appears to be peaking which would also fit well for a top. 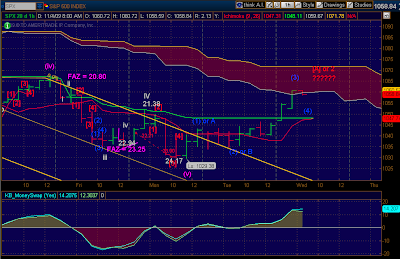 Posted by Robert Campbell at 08:17