Well that was fun! My indicators have returned to Bearish.

The A_Speculator is a study I wrote that weighs optimism. It can not be used alone, it merely suggests the mood of scalpers and day traders and must be seen as an attribute to other indicators. It's best used in short time periods of 60 minutes or less.

The price is between the Bullish Tenkan-sen/Kijun cross and the Kumo. This is neither Bullish nor Bearish as it shows weakness but the Kumo will provide Support.

In cases like this a narrow trading range often develops as the Price becomes trapped. 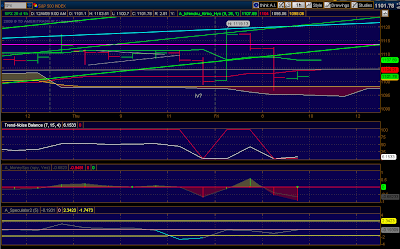 07:15 PST
This chart shows indicators based on volume which indicate a peak being formed.

Earlier I said no TA could have seen this coming. I'll take that back as AMBG did forecast this jump. Alexander is Bullish and looking for 1130 SPX.
And in all fairness I believe Daneric had both a bullish and bearish scenario, but I doubt this type of reversal was anticipated.

The surprising thing to me is the diverging EUR/USD and SPX.

I have redrawn the pitchfork and can no longer find a way to draw a downward fork. 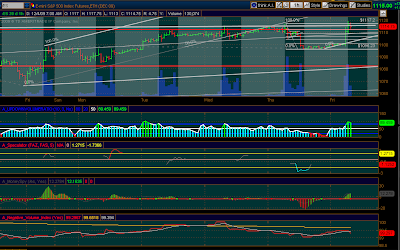 06:30 PST
There is no TA in the world that could have seen this one coming. From what I understand unemployment numbers have been adjusted downward causing the market to rally along with the USD...

Here's a story with more details 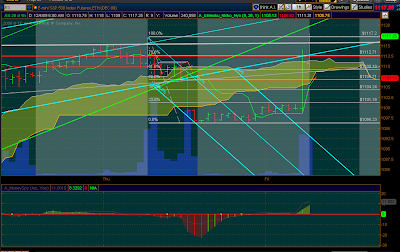 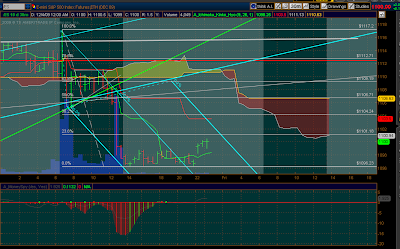 Six and a half hours before the market opens the /ES is continuing it's correction. The Ichimoku chart shows resistance from the Kijun-sen and the Kumo but Price has moved above the Tenkan-sen which now gives warning to the Bears.

The pitchfork may need to be adjusted, but this was my interpretation of it's placement. I feel pretty confident that it will be close to correct.

MoneySpy has moved slightly above the Buy/Sell line.

I interpret these Bullish signals as signs of a correction. Resistance from the Kijun-sen and the Pitchfork sits just two points above our current /ES Price.

Below is the M60 EUR/USD chart where a similar resistance from the Kijun-sen and Kumo is presented. Stochastics are also showing overbought , The ADX +DI and -DI also appear to be showing weakness.

My feeling is that the Bears may very well be in control once again. Breaking the trading channel which began in early November will be the clincher.

I'll try to make updates in the morning, but my contracting business is keeping me busy and I may not be available.

Posted by Robert Campbell at 00:33