As I suspected the Price became trapped between the Tenkan-sen and the Kumo. I've placed an oval highlight on the chart showing a weak spot in the Kumo on Monday about two hours after the open. This is a likely place for Price to break through below the Kumo.

The Kijun-sen has now joined the Tenkan-sen creating an even stronger line of resistance just above Price at 1107.82. This Ichimoku Chart remains slightly Bullish, but the above evidence suggests that the market is weakening.

So far the Andrews Pitchfork appears to be properly placed with several reversals at the centerline. If Price continues to follow this fork, it will be interesting to see what happens at the 1085 level. We entered this trading range 19 trading days ago. The top side of the trading range has been bumping up against the trend line from March. Trading below this trend line is significant and tells me that even though higher highs are being made, the Bears are gaining strength. 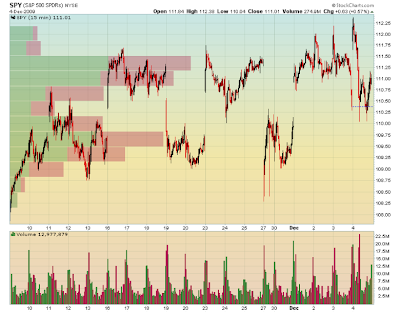 This Price by Volume chart of SPY shows the resistance/support levels that will give any breakout from the trading range a solid platform to push off from. The Bollinger Bands have contracted four times on the hourly chart since the range began. As you may recall I warned of the extreme narrowing just prior to our explosive 22 point whipsaw. What an unusual ride that was! I've included the Daily SPX chart below. Notice how the Bollinger Bands have narrowed. This is an indication of a large move on the horizon.

MoneySpy is Bullish on this Daily chart, but notice the way it has diverged from the upward Price trend. It has been waffling across the Buy/Sell line and is currently declining and near the Zero line. The Hourly Chart is already Bearish, so my inclination remains Bearish

Now for EW proof :
T-Bone made a series of Elliott Wave Charts that I think are phenomenal. You can see all of his charts by CLICKING HERE.


P.S:
Don't read it unless you want to get angry about the insider trading that the SEC permits.

Posted by Robert Campbell at 13:31