I'm constantly amazed at the way the candle sticks stay on the best side of the market. The candle sticks had those who followed the rules, long two days ago and while yesterday offered the Bears an opportunity to regain control when a Dark Cloud Cover Pattern was formed, they failed and the Bulls ran away with the market forming a White Marubuzo. This is not considered a particularly strong candle stick by itself so we will have to see if the Bears can turn it around. 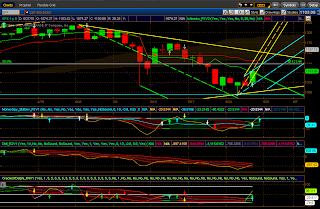 We have slightly breached the Green fork which I'm willing to give a little slack. I expected that we would finally make our way here, but it does not feel as comfortable as I had imagined. There is strong resistance from the 60 Minute Kumo near 1115 until Friday 14:45 EST, and then it weakens after that.

The Daily Kumo will provide strong resistance near SPX 1130. Long term indicators still reveal that the Bull market has most likely turned into a Bear market. 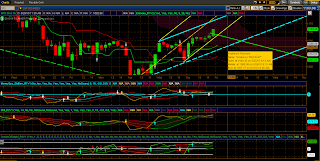 The Hourly Kumo has been breached and the Tenkan-sen / Kijun-sen are in a Bullish cross. Resistance from the top of the Kumo weakens at 14:45 tomorrow, but it should offer good resistance until then at 1113.65

Should the Green Fork fail the Cyan fork will most likely establish the path. 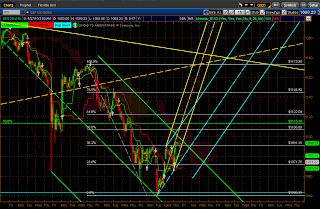 The hourly indicators look like they are due to reverse, but the daily charts have issued a buy.
I'm still looking for a reversal but recognizing the upside potential is prudent. 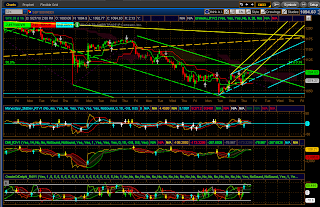 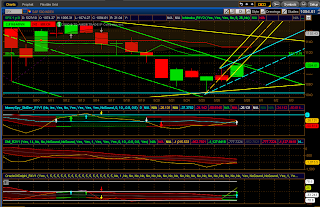 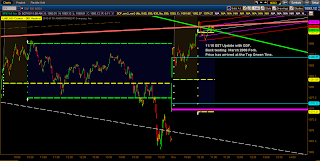 DDF has a Neutral bias today, and the Oracle has turned green. But Price is in the vicinity of the top tine. If the Green fork holds it will be very good for the Bears.

Persons Pivots and Woodies Pivots are showing 1100 pivot points.
Price is back testing the March 2009 Andrews Pitchfork as I have drawn it. In the past it has proven to act as resistance.

10:00 EST
The 60 minute Kumo appears to be in charge. Perhaps the Fork will require a small downward tweak. If this day turns into a Black Candle it will leave a Bearish upper shadow. It's probably too soon to be making this prediction but the Oracle of Delphi is making red. 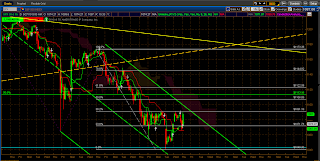 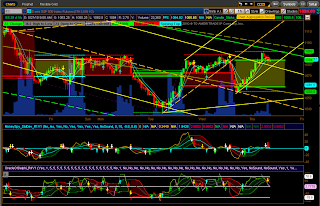 Posted by Robert Campbell at 06:21