Forks, Fibs and their Relation to Price: 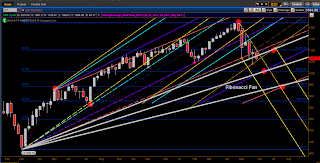 Drawing the Andrews Pitchfork from March 09 has been elusive and enlightening. I've come to believe there is not one way to draw forks. It may be more about the relationship with Price than finding one correct fork. I hope you will spend the time to study the forks I have drawn.

The Peach fork was drawn by passing the handle directly through the consolidation of the past five weeks and allowing the Top tine to run through the peaks of the September/October midsection. This creates a forecast fork.

The Purple fork is also a forecast fork created by connecting the handle with the January low of 1045. It passes precisely at the highs of the September 2009 midsection.

The Cyan fork fits well with the low points and could have been drawn slightly wider such that the handle connects with the 1219.8 peak instead.

And finally the yellow fork. This fork fits the way I would prefer to draw the fork. There is an even distribution between the top and bottom tines and the handle. I'm not fond of using the -0.5 tine, but like I said this is about finding relationship with Price. I made this fork the brightest of all the upward forks because of the way Price falls so well within the fork.

Next I drew a heavy white Fibonacci Fan, and a blue Fibonacci Retracement. The red ovals are points of interest and may be areas of future market equilibrium.

It may very well be that forks can be drawn, and shifted as Price reveals more of it's design and that the fractal nature allows more than one fork from a single origin.

Earlier this week I demonstrated an experimental fork that relied upon a point that was not at the extreme edge of the Price pattern. So far that fork has remained valid. 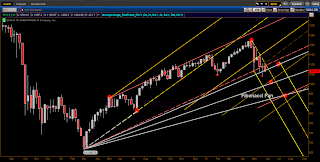 The Green Curve is the 200 Day Moving Average.
This is probably the most important indicator to be watching right now. 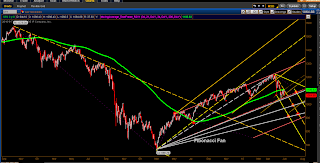 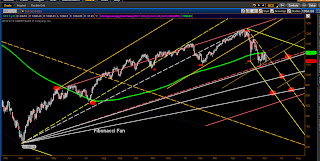 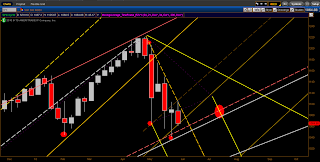 Friday closed with a Black Opening Marubozu, forming a Bearish Shooting Star Pattern, and an engulfing candle which is also Bearish. 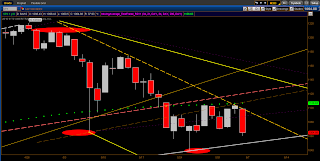 Posted by Robert Campbell at 11:55