The really large forks.
These colors do not match the other charts 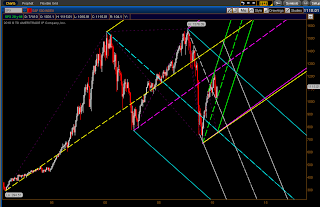 Market recap:
Today's White Closing Marubozu is a very bullish candle stick, and indicates that established long positions should continue to be held. 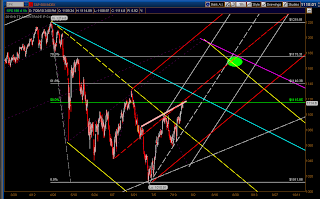 Until the Red fork fails it should be considered the prevailing fork.
I expect the Cyan Fork to hold for a while, but the Cyan fork may only be what I refer to as a line of influence, offering only temporary resistance. The Magenta fork was drawn using the confluence near the Green Oval, and has little else to support it's relevance, but I've drawn it because there appears to be a strong chance of Price following the Red fork beyond the top tine of the Cyan Fork. A target near the 78.6% level appears likely.

So in conclusion I'm expecting a continuation to a level near the 61.8% then a pull back along the Cyan Fork, dropping into the lower section of the white fork, then possibly finishing with a rally up to the 78.6% retrace area unless the bottom tine of the Red Fork is broken first. 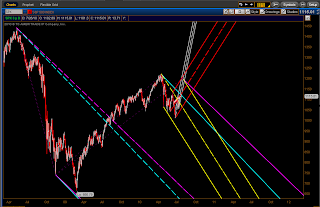 I'm still pretty busy with the building project I'm working on, but I expect I will soon be able to devote more time the the market again when this job is finished.


Analysis presented on this Blog has only informational, and educational purpose, and does not represent a proposal for buying or selling contracts, equities or currency.

Posted by Robert Campbell at 21:05