OK I'll give you the bottom line right at the top line. Bullish to 1115 unless the Bears can take the market below 1057 to break the Hourly Kumo. There you have it. If you want to understand, why it's going to take studying these charts and reading along with me.

Yesterday I called for the bottom at 1068 and missed by 5-1/2 points after bouncing around the 1068 level several times. I also called for a late day rally to 1080. The rally arrived a bit late, and has yet to finish, but the forks are telling me there will be a rally on Monday.

How high? Well I see a Fibonacci, and a Persons Pivot at 1074, and that looks right for a bounce off the Yellow handle. 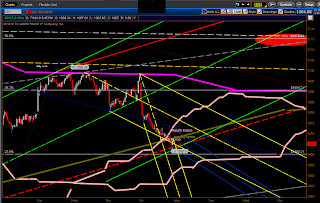 But whats going on with the major trend. A look at the VIX is not so Bearish. Starting with Monday it appears there is a battle between the Upward Cyan and Downward White forks. Looking to Persons we see weekly pivots below the current level so the odds lay in favor of the White fork. Where's that going to take us? Well, on the VIX chart the Yellow Fork is waiting to be touched, and that appears to coincide with the lowest Persons Pivot. 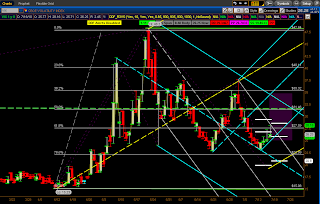 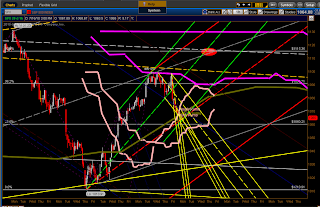 The Candles have been short since 1112 SPX on 6/22/2010 and it may seem that they have failed us, but we will have to let it play out before passing judgment. Certainly a break to the down side would set the Bear market in motion at this point and that could still happen. Thinking in terms of weekly candles the Bearish Harami still needs confirmation and it's a strong warning to the Bulls.

Currently my indictors are Bearish on the hourly and Bullish on the Daily.
It's a mixed bag, and of course I'm Bearish overall, but the tug of war continues to play out and the both sides are playing to win what has come down to a critical choice. But even if the Bulls manage to control the market for the next week or even two, they are clearly loosing the battle.


Analysis presented on this Blog has only informational, and educational purpose, and does not represent a proposal for buying or selling contracts, equities or currency.

Posted by Robert Campbell at 09:44