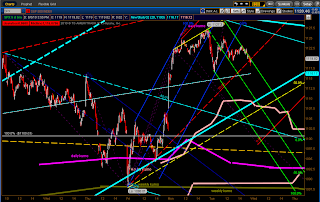 Market Recap:
Tuesday leaves us with a Black Spinning Top which created a Bearish Harami. A Bearish Harami has only a 50% chance of delivering a Black candle for conformation on the following day. The Black Spinning Top has only a 51% chance of delivering a reversal so the candle sticks are telling us nothing other than if there is a confirmed sell signal we should take profit from the long positions and go short.

Think about that for a minute. Price is within touching distance of the Cyan fork from 2007. This is a huge fork! When price begins traversing to the other side of this fork it's going to have a long way down. Currently the handle is at about 650! Oh, yeah that's about where we were little over a year ago.

My indicators are Bearish and remain somewhat overbought on the Hourly charts and the Daily charts appear to be setting up for a peak. but remain Bullish.

I'd say the odds lay in favor of the Bears tomorrow, but we should know soon after the open which way it will choose. 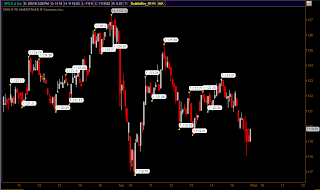 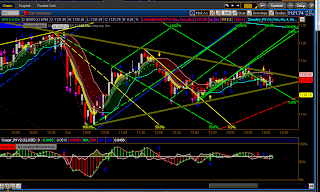 14:53
My twitter followers got the update a couple hours ago that 1124 was expected to be tested and rejected. I may have missed this turning point by 0.95 points SPX. Currently Price is at 1121.93 . Breaking below 1120 should send the market lower during the last hour.

As it stands the day would end in a Bearish Harami, but that would need to be confirmed with another Black candle as a Bearish Harami by itself has only a 50% chance of a reversal.


11:54 ET
This is how I have my forks drawn today. My best guess is that the Cyan fork will not be broken. The Bears need to break the Blue fork and then the Red fork.

My indicators have become Mixed to Bullish. Not anything I can really use at this point.
Tenkan-sen supporting at 1122.08
Flat Kijun-sen will attract price, but Hourly Kumo and Kijun-sen will offer support near 1108 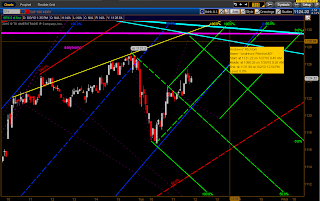 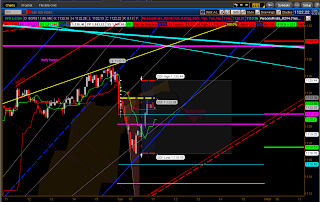 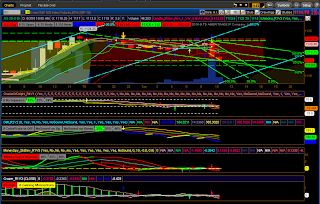 There are three support levels to clear before the Bears can claim victory.

My hourly indicators have turned Bearish, and there is a weakness in the Daily Kumo which will last for most of the day. This is a good opportunity for the Bears to break the first support. The Andrews Pitchfork is indicating support in the 1110 - 1112 area. Breaking 1110 would open the door to an approach to the 1100 and 1088 supports.

Posted by Robert Campbell at 07:15