Morning Update:
It's unfortunate that I used blue for two upward forks.  Just to be clear I was referring the the smaller blue fork on Friday.   Monday has breached that fork.  That small blue fork has failed to be validated and it is the larger Blue Fork from October 2011 that is being tested now.
This is a MAJOR FORK of great importance.
1330 area will probably provide support, but once again the market appears to be in the process of initiating a new downward RED Fork .

Referencing my comment from Friday
'if the 200 DMA is broken I think that will signal that the blue upward fork from 10/27/2011 no longer controls the upward pattern.  The 1320 to 1330 area will be interesting.'

This is the place where it gets interesting and we find out it this 9 month trend is going to hold or fold.


You may recall that I have spoken of 1295 as a support.  We appear to be setting up for a test of that level and then after that 1170 and 1070 are possible targets.   This is the large scale picture.  It's not going to happen over night, or in a straight line, but this is the type of collapse we need to be prepared for. 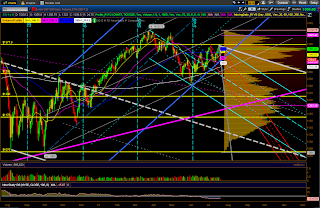 I have not prominently drawn the channel (gray), but this also conveys the importance of the the current level.
The yellow price levels indicate support levels we are likely to encounter during the collapse, but the major support does not appear until 1070.  1070 also falls within the range of the large white fork's handle. 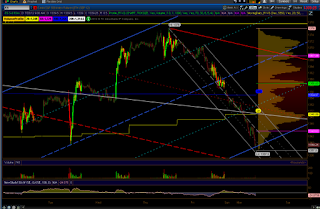 On Friday I said 'The red downward fork is looking like the new trend, but the blue upward fork would look better if it finished filling the lower half. So it's likely to test the top tine of the red fork again, and maybe push it just a little bit wider.  If this happens it will only tend to confirm the validity of the red fork.'

We are now at the bottom of the blue fork. I'm expecting to find support here at 1337.50.  But as you know I have also been looking for a catastrophic collapse.  There will come a day when all the micro stops and supports become meaningless.

The Blue fork may look better and it would be nice to validate the Red fork with one more turn at the top tine but it's a risky game right now, because both the Red and the Blue fork have yet to be validated

Posted by Robert Campbell at 06:26