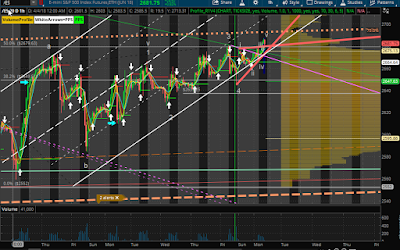 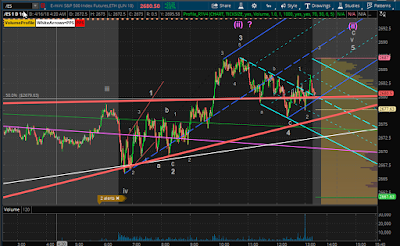 This has been difficult to count and each time I think I have this count figured out the fractal just adds on more wave.
Previously I thought the diagonal counted out a beautiful wave c but it now looks like Wave 3

Where I now have Wave 3 I previously thought that was Wave (ii) pink.  But then yesterdays decline did not come back with 5 waves which should have been a red flag.
I think this is nearing the end of Wave c of Wave (ii).  The next Fibonacci level is 0.618 of wave (i) at 2709.    The market may not make there, but it's good to know.  There is a lot of resistance at 2694.
If the today or tomorrow ends below 2645 I'll feel better about this count. If this is another diagonal it should break down to about 2655 in a pretty swift move.  Maybe today or tomorrow.

Posted by Robert Campbell at 11:05